Members of the Medicine Practitioners and Sellers Association in the Ashanti Region have pledged to end the sale of Tramadol at their counters.

The members say they are worried over the continuous abuse of the painkiller by some Ghanaian youth and other persons within the society.

They have called on their colleagues to remove such drugs from their shelves to ensure compliance with the pledge.

The members made the pledge at a well-attended meeting with officials from the Pharmacy Council, the Food and Drugs Authority (FDA) and the Police Drug Enforcement Unit at the Kumasi Cultural Center.

The meeting, which focused on the agenda “Fighting Against Drug Misuse”, discussed how the sale and misuse of drugs especially Tramadol can be curtailed.

The attendees appealed to the Pharmacy Council, the FDA and the Police to intensify their surveillance to get rid of local and foreign drug peddlers who engage in the sale of such drugs.

The members who spoke to Citi News also called on the security agencies to tighten checks at the borders to prevent the entry of such drugs into the country.

Tramadol is a pain relief drug, which according to medical experts, functions like heroin and can cause psychotic problems as well as damage vital organs in the human body if abused.

Recent surveys have shown that the drug is being abused by some youths as well as some market women, drivers and in some cases students.

An Executive member of the Association, Mrs. Elizabeth Adu Ameyaw vowed to report members who do not comply with the pledge to the police.

According to her, some herbal shops within the region were also engaging in the sale of Tramadol and other drugs that have been abused by members of the public especially the youth. 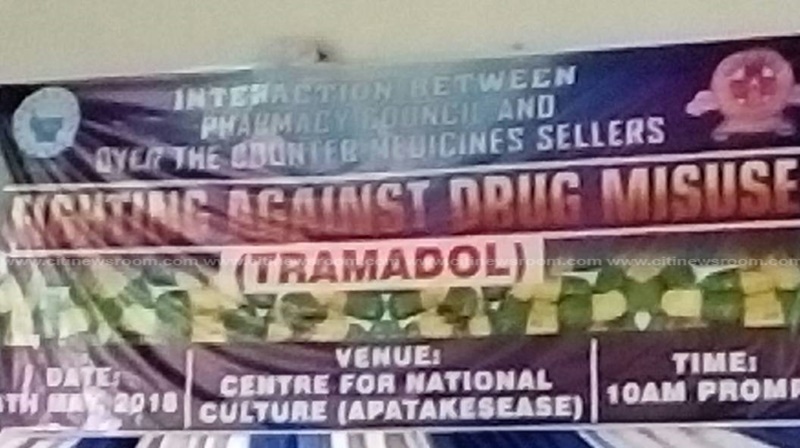 She appealed to the FDA and the Pharmacy Council to clamp down on foreign drug peddlers who sell such drugs.

“Honestly we have all pledged not to sell it because Tramadol is a pain relieving drug, but at the same time, when you take it with these cough mixtures and other Energy drinks, it acts like cocaine. So that is why we are saying that we won’t sell it and we have pledged not to sell it”, she emphasized.

Another member of the Association said, “as a chemical seller, I am not entitled to sell Tramadol because of the continuous abuse of the drug”.

He also warned foreign drug peddlers who bring in such drugs through unapproved routes to desist from such business or members of the Association will expose them.

Chairman of the Association in the Bosomtwi District, W.O Arthur added: “We pledged and we have promised that all chemical sellers in the Ashanti Region will not sell Tramadol again”.

He advised the youth to desist from abusing the drug that is only meant for relieving pain. Mr Arthur further said, he will embark on a campaign to educate chemical sellers within the Bosomtwi District on dangers of the sale of Tramadol and other harmful drugs.

Ashanti Regional Manager of the Pharmacy Council, Christian Trebi Quao described the pledge by members of the Association to halt the sale of Tramadol and other drugs that are being abused by the public as welcome news.

He said the council has embarked on series of engagements and has also clamp down on law offenders.

He indicated that the meeting with members of the chemical sellers Association was a proactive step to get them on board in a bid to end the abuse and misuse of drugs by a section of the public.

Mr. Trebi Quao expressed worry over the wanton abuse of tramadol within the Ashanti Region especially amongst the youth, students and other members of the general public.

He added that the Council will not relent on its fight against the abuse of drugs and will continue to partner with the chemical sellers to curb the canker.

Officials from the FDA and Ghana Police Service who were also present at the meeting pledged their support to the council and the Association to help address the problem.

Govt Must Come Out with Alternative Retirement Plan—Prof. Bokpin