The Attorney General’s Department has registered its opposition to an application by the legal team of former Chief Executive Officer (CEO) of COCOBOD, Dr. Stephen Opuni, demanding to be furnished with the relevant documents based on which he’s being prosecuted.

According to a Deputy AG, Godfred Dame, they were not bound by law to provide the documents as requested because the case is one of a summary trial rather than a trial of indictment.

Godfred Dame further stated that the defence was only entitled to relevant evidence and not all the documents they have demanded.

The prosecution further indicated the application is not supported by any human rights law as referred to by the defence lawyers.

Following this resistance, the defence lawyers, represented by Samuel Cudjoe, prayed the High Court to refer the motion which is centered on article 19 of the constitution to the Supreme Court for interpretation.

Godfred Dame’s comments come despite an earlier assurance from the Attorney-General and Minister for Justice, Gloria Akufo, that her office would grant Dr. Opuni’s request.

In an interview with Citi News in Cape Coast, she said the documents will be made available to Dr. Opuni for the sake of fairness and justice but in accordance with law.

“We are going to court. We are prepared to give them what we know. We have nothing to hide. After all, we believe in the right of the individual to defend himself particularly when it is against the principle that you are presumed to be innocent. We are happy to give that which they want, but we will play it as the law provides. That is what is at the heart of the matter now,” she said.

Dr. Stephen Opuni, a former COCOBOD CEO, had filed the motion seeking to be supplied all documents the AG intends to rely on in the ongoing case involving himself, the state and a businessman, Seidu Agongo.

He stated that he would be able to mount a better defence if he is furnished with the relevant documents the prosecution will be relying on.

Dr. Opuni and two others are facing 27 charges of causing financial loss to the state, conspiracy to commit a crime, defrauding by false pretence, abetment of crime amongst others.

The charges are in relation to a supposed fraudulent fertilizer contract worth over GH¢43 million. 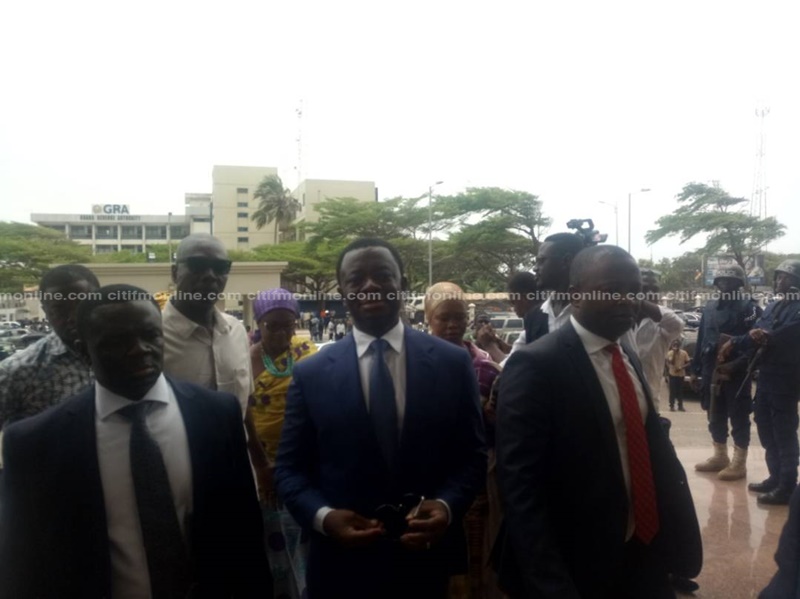 Facts of the case

While delivering the facts of the case on Monday, March 26, 2018, the prosecution told the court that Dr. Opuni misled the Public Procurement Authority (PPA) into awarding a fertilizer contract to Seidu Agongo and his company, Agricult Ghana Limited.

The prosecution further accused Dr. Opuni of also truncating the time period of testing of the fertilizer brought into the country by the Cocoa Research Institute of Ghana (CRIG).

The prosecution said Agongo acting on behalf of Agricult submitted to the Cocoa Research Institute of Ghana (CRIG), fertilizer for testing.

According to the prosecution, the testing was supposed to be in two phases – to be applied to seedlings and applied to matured plants for at least two planting seasons before it could be certified for use in Ghana.

But the prosecution said the testing was done for only phase one after which a report recommending its use was given without second phase testing.

The prosecution said the investigations revealed that the former COCOBOD CEO, Dr. Stephen Opuni wrote to CRIG asking that the testing period should be shortened, and also wrote to Seidu Agongo that his fertilizer had been certified for use on cocoa after which a certificate was issued by CRIG.

The prosecution also said despite not applying for renewal of certificate for 2015 and 2016 as required, Agricult upon the instance of Dr. Stephen Opuni had the license renewed without any further testing.

Dr. Opuni, the prosecution said applied to the Public Procurement Authority for approval for Agricult Ghana Limited to be single-sourced to procure 700,000 litres of the fertilizer although conditions for single sourcing had not been satisfied.

According to the prosecution, the letter directing the PPA to single source the project quoted an amount of $19,250,000. The nature of the product was captured as liquid despite it being powdery form.

The AG said the PPA approved the request, adding that Dr. Opuni then put in another request which was also approved.

In November 2015, the PPA approved the application for single-source procurement. The prosecution said three separate agreements were signed and executed by Seidu Agongo’s Agricult Ghana Limited. The prosecution said investigations had revealed that the contracts were executed when the company did not have a valid certificate to supply the fertilizer.

Whereas the material safety data sheet accompanying the fertilizer that was originally submitted to CRIG for testing described the substance as powdery, Dr. Opuni in requesting quotations for supply and delivery under the three contracts referred to the fertilizer as liquid and quoted in litres, the AG said

The prosecution continued that when the products arrived in Ghana, COCOBOD was required to notify CRIG for testing to ensure it corresponded with what was tested by CRIG. No such testing was carried out.

In 2017, COCOBOD carried out audit into testing of fertilizers after which it referred the matter for criminal investigations. The investigations the AG said, established that the product supplied by Agricult Ghana Ltd was different from the sample submitted to CRIG for testing.

Further tests the prosecution said, revealed variously that the fertilizer supplied had been adulterated and did not meet the specified standard, and that the product could not be used as nutrient on cocoa.

Furthermore, the test indicated that the fertilizer could be harmful to humans and animals as well hazardous to water.

Even though COCOBOD had spent a sum of $55million on the fertilizer, COCOBOD’s records shows there was no significant increase in the cocoa yield during the period, the Ag stated.

The prosecution further said investigations established that Seidu Agongo deposited an amount of 25,000 cedis into the account of Dr. Stephen Kwabena Opuni to influence the award of contracts.

It has been established that between 2014 and 2016, contrary to law, Seidu Agongo and Agricult manufactured fertilizer in commercial quantities when it had not been registered by the Ministry for food and Agriculture.