Students and lecturers of the Koforidua Technical University will return to their classes today [Friday] after protests against the School’s Council disrupted academic activities on Thursday.

The lecturers and students, who were clad in red, blocked the main entrance to the school amidst drumming and chanting of war songs, preventing council members and other administrative staff from accessing the university.

However, the Chairman of the local chapter of the Technical University Teachers Association of Ghana (TUTAG), Dr. Anthony Ayakwa, has stated that the lecturers will return to class from today [Thursday], after they received assurances from the Council that their concerns will be addressed.

The Association had earlier indicated that they would embark on a strike if the issue was not dealt with, but it appears they have decided to suspend that decision following the assurances from the Council.

When asked on Eyewitness News whether teaching will resume at the school on Friday, Dr. Ayakwa said: “Of course. In fact [yesterday], we did not cancel lectures. We only rescheduled most of our lectures. The lecturers did not want to miss class. We think that strike is not the best solution for this situation so we resorted to presenting a petition. We only rescheduled most of our classes so that we could submit a petition for things that are very important to our members.”

“We did present our petition to Council. They sat and after a long deliberation, Council has looked at the details of our petition and asked that the person nominated to look at the issue of our promotion be written to as a matter of urgency so that our concerns are addressed…We have received information from the Council meeting that they had started working on the issues. We’ll wait for the response from the Council which we hope will be favourable.” 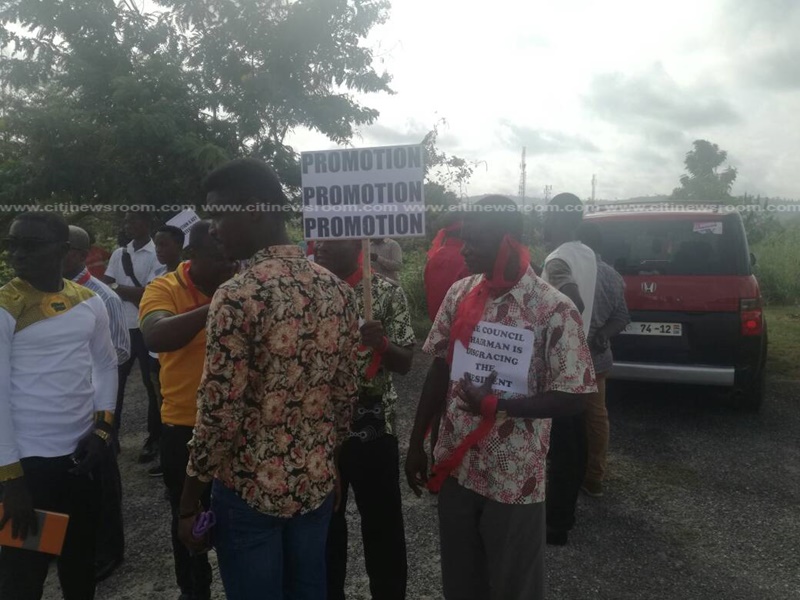 The lecturers had protested against the Council’s Chairman, Professor Samuel Apori, accusing him of interfering in the running of the school, something they believe is negatively affecting the institution

They also held placards indicating their frustration at the Council for failing to ensure that committees that had been put in place to work on the promotion of lecturers carried out their mandate.

And according to Dr. Ayakwa, despite several complaints from his outfit the Council had expressed an unwillingness to immediately address the issues surrounding the promotion of lecturers.

He claimed that the committee set up to oversee the processes had not sat, and no reasons for the delays had been communicated to the affected lecturers.

“The Council was put in place as far back as September, and as far back as 2016, so many of our colleagues had applied with their papers for promotion. It appears that even though the efforts to ensure that they are promoted were being made at our level, the Council sub-committee that was supposed to have worked on it was not sitting at all. In fact, the last time they were supposed to have sat on February 28, they did not, and no communication was provided to members as leading stakeholders,” he said.

“We believe that time wasted is money, we believe that our conditions of service haven’t improved much so when people have gone through the academic processes, have obtained PhDs and done a lot of publications and require promotions, the right things have to be done. Unfortunately, we are not in the job market alone. There are a lot of other universities that are looking for people with such requisite skills. It appears that all the issues we raised were not listened to and that has led to the current state of affairs.”