Ambulance Service to Begin Recruitment Despite Having Few Ambulances

The Ghana National Ambulance Service will soon begin a process to engage more people despite serving the 29 million Ghanaian population with only 55 functional ambulances.

An Emergency Medical Technician (EMT) is a specially trained medical technician certified to provide basic emergency services before and during transportation to a hospital. 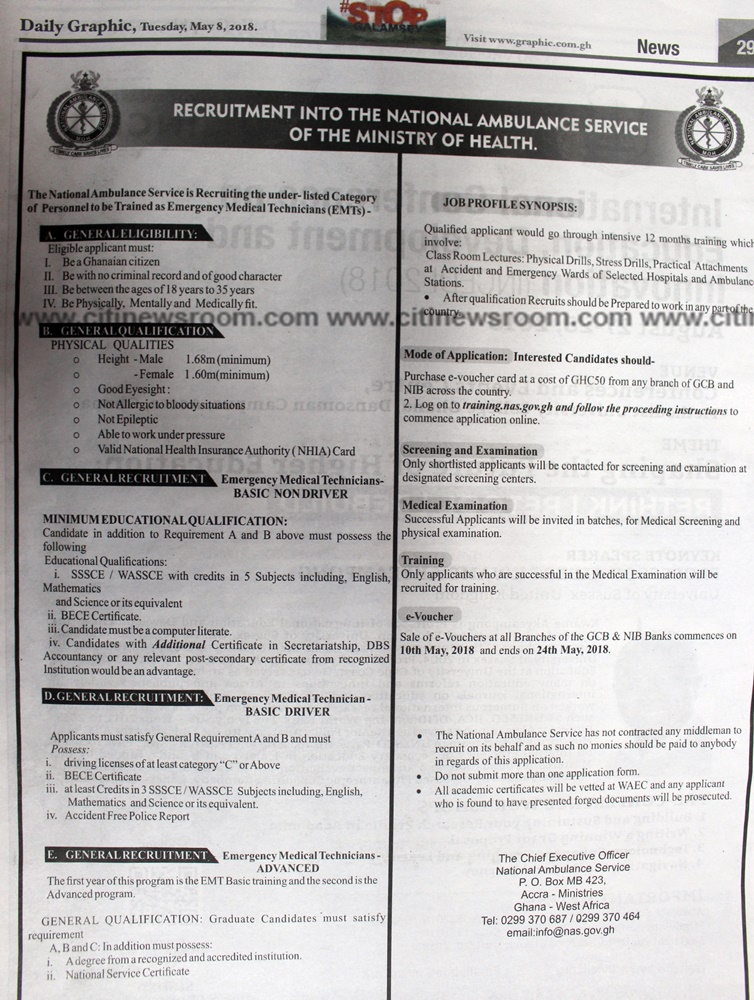 Data gathered by citinewsroom.com suggests that the Service is faced with many challenges with regards to logistics such as their specially fitted vehicles.

The data showed that although NAS has 155 ambulances nationwide, only 55 are operational, while the remaining 100 have broken down.

The situation paints a gloomy picture of the country’s emergency health service response system, which has been blamed for some of the deaths recorded in the country.

Meanwhile, a publication in the Daily Graphic Newspaper from the Service said potential recruits are supposed to buy an e-voucher of GHc50 from any GCB or NIB bank nationwide to enable them to register online.

“Qualified applications would go through intensive 12 months of training which involve Class Room lecturers, Physical drills, street drills, practical attachments at accident and emergency wards of selected hospitals, and ambulance stations. After qualification, recruits should be prepared to work in any part of the country,” the publication stated.

Applicants after purchasing the e-voucher cards are to log onto NAS’s website training.nas.gov.gh to fill the online application form.

Chief Executive Officer of NAS, Professor Ahmed N. Zakariah, had earlier complained that the Service lacks a dedicated source of funding, and is forced to rely on the meager allocation it receives from government through the Ministry of Health.

He also lamented that most of their ambulances are in bad shapes because of the poor road network in the country.

He further lamented that some 200 ambulances which were supposed to have been procured by the erstwhile Atta Mills administration for them did not materialize because the first batch of 30 ambulances that were brought into the country were not up to standard.

He said if they had received those vehicles, it would have assuaged the current challenges they have with logistics.

“It is a fact that about 100 of them normally have various degrees of fault. Some have engine problems and for them, they would need complete new engines. The reason that many of them are spending time [at the mechanic shop] is that the service does not have a dedicated source of funding so when we have major issues that are capital intensive; it means we have to wait till we get some support from the ministry because we receive the same level of budgetary allocation just like any other agency. What we receive is far lower than what are budgetary needs are. So we have a multiplicity of factors that really impedes our smooth operation,” Professor Zakariah added in an interview on the Citi Breakfast Show on Monday.