Investigative journalist, Anas Aremeyaw Anas and his Tiger Eye PI team have released receipts detailing payments they made for the former President of the Ghana Football Association (GFA) Kwesi Nyantakyi’s trips to Dubai.

The receipts according to Anas’ team include Nyantakyi’s airfare and hotel bills.

This comes on the back of Mr Nyantakyi’s denial of claims that he was given $65, 000 as a bribe by Anas and his team. 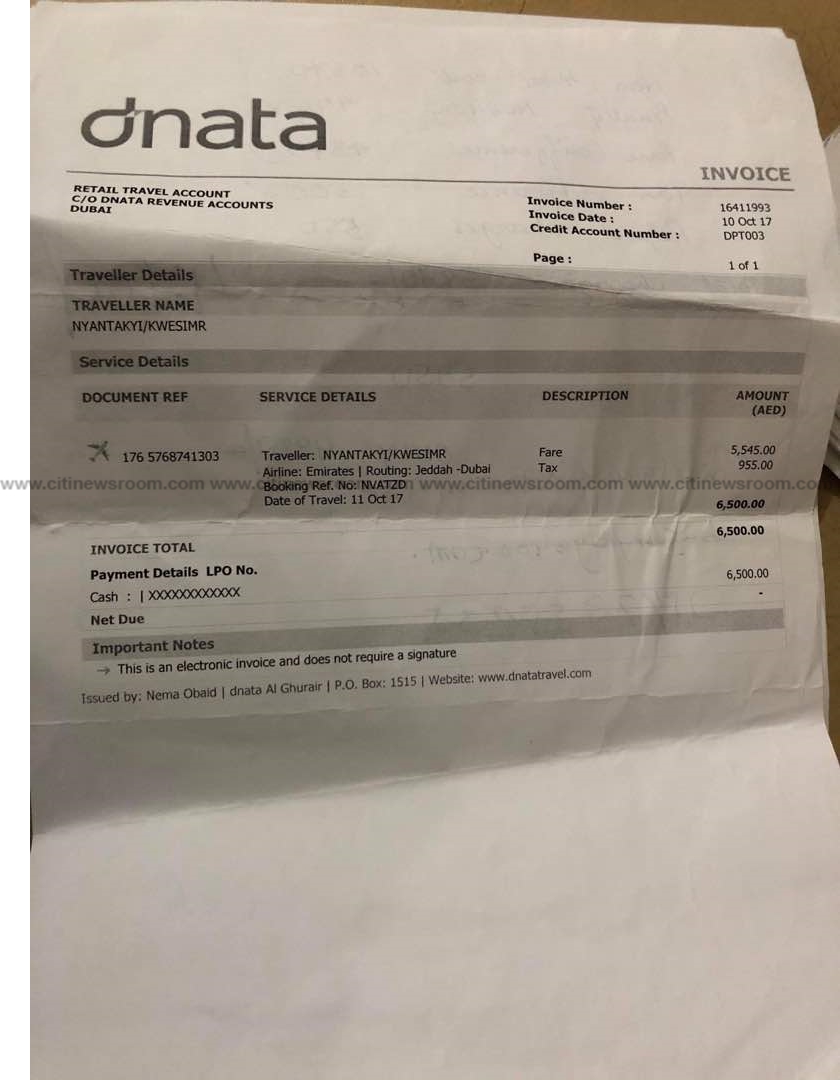 The Anas’ piece had suggested Mr Nyantakyi accepted $65,000 in banknotes in October 2017 from a man claiming to be a member of the Qatari Royal Family.

However in an eight-page statement, Mr Nyantakyi explained that he was only given $40,000 which was not a bribe, but a refund for his air travel and accommodation. 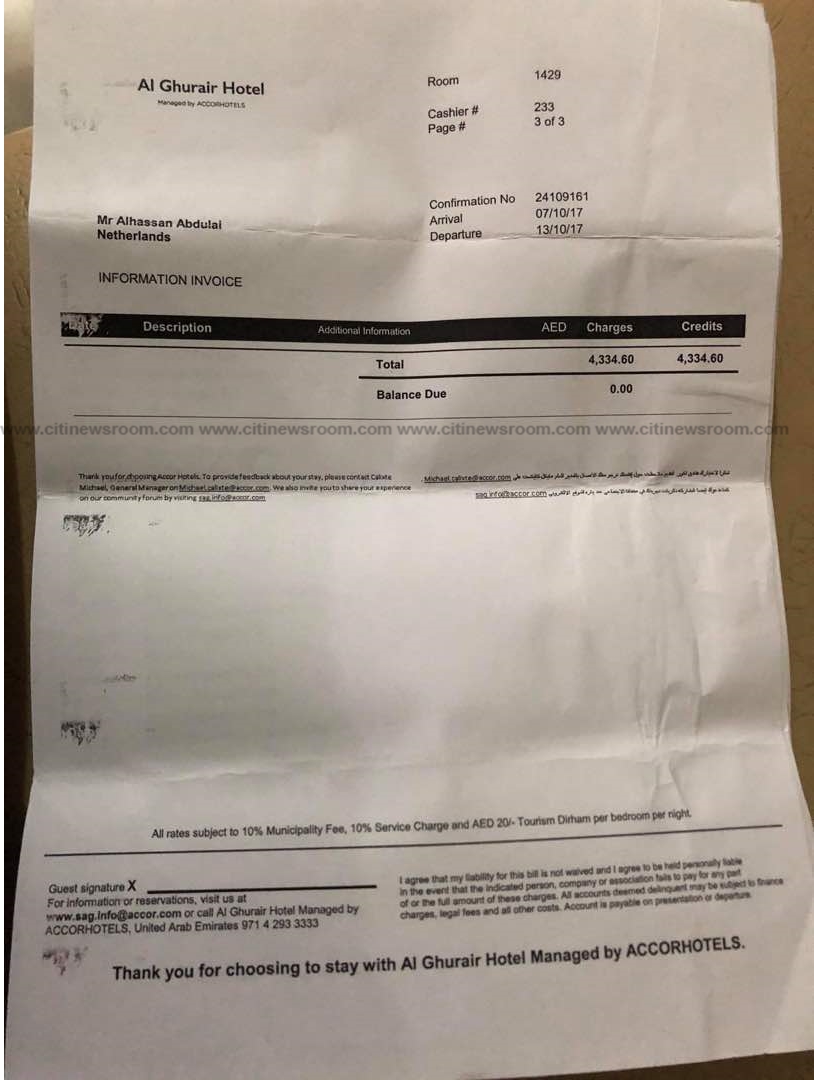 He said the audio that painted a different picture in the story was created to present a false impression. 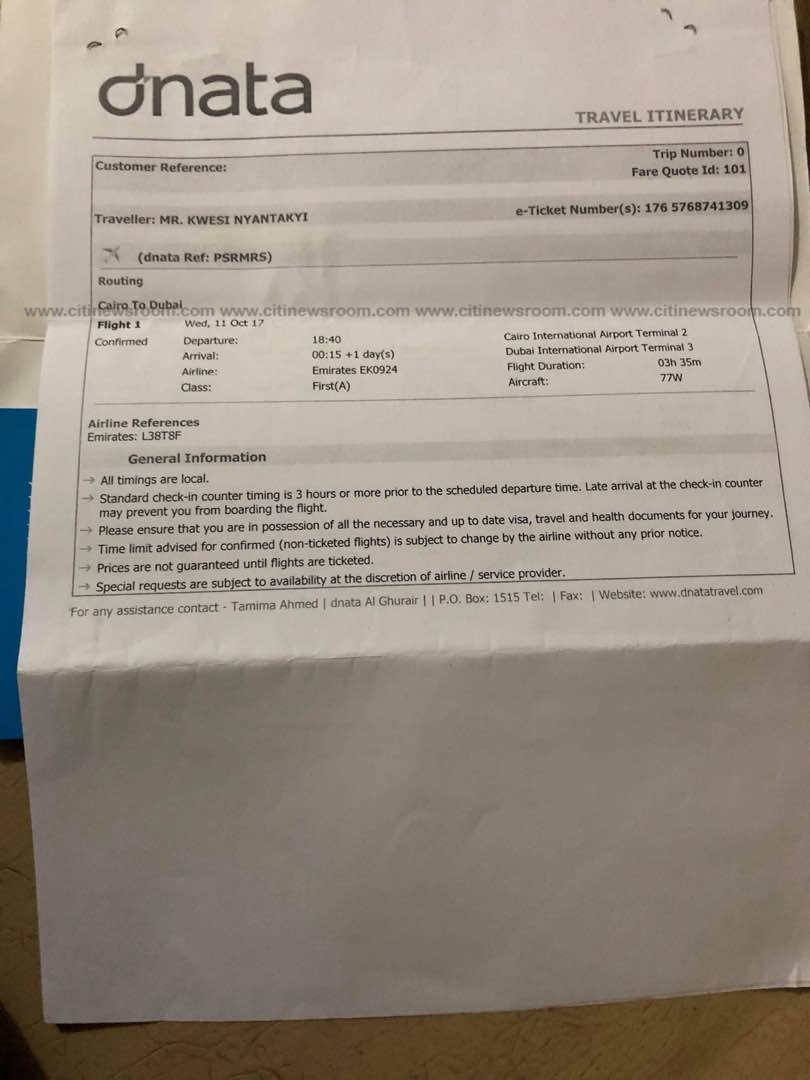 “I was handed the sum of $40,000 only in eight bundles of $50 banknotes but not $65,000 which both the Sheikh’s agent and I understood to be reimbursement for the travel costs incurred by me, at the Sheikh’s request. It is very easy to confirm how much was given to me from the videotapes. The money was exposed before I was tricked to put in the bag personally.”

Kwesi Nyantakyi has currently lost his standing, and all positions in local and international football after Anas Aremeyaw screened his latest exposé, dubbed #Number12  which captured him [Nyantakyi] detailing how he was going to personally benefit from a supposed $15 million sponsorship money for Ghana’s league.

Nyantakyi, also detailed to the supposed investor, how he [the investor] could be given several government contracts if he pays bribes to some key government officials such as Ghana’s President and the Vice President.

It is not unclear whether these receipts cover all the trips Mr Nyantakyi made to Dubai during the period of the investigation.

Although Kwesi Nyantakyi is serving a 90-day ban from FIFA, Anas wants him banned for life for the misconduct.

Anas in a 10-page petition to the world football governing body indicated that the audio-visual evidence gathered by himself and his TigerEye PI team showed that Mr Nyantakyi had breached a number of FIFA’s regulations and codes, warranting a lifetime ban from all football activities

He is still being investigated by the Criminal Investigations Department (CID) of the Ghana Police Service following a complaint filed by President Akufo-Addo after watching excerpts of Anas’ video that showed the former using the president’s name to persuade foreign investors to part with $12 million in order to facilitate the approval of government contracts for them.

The government has initiated moves to dissolve the Ghana Football Association.

It has also set up a 5-member interim committee to manage football in the country after securing a 10-day injunction on the Ghana Football Association.

Anas has again petitioned the Bank of Ghana, EOCO and other institutions to investigate Mr Nyantakyi for money laundering.

Use of Mobile Phone at Work Breaches Code of Conduct – Director