The Media Foundation for West Africa (MFWA) has scored the questions asked by Citi FM’s Bernard Avle, Editor of the Insight newspaper, Kwesi Pratt and GBC’s Abdul Moomen at President Akufo-Addo’s media encounter as the best.

A statement released by the MFWA on Wednesday said the ratings were done based on the relevance of the question, whether a question was a leading one, whether the question had good background and contextualisation as well as clarity.

Below is the full statement from the MFWA

The President of Ghana, Nana Addo Dankwa Akufo-Addo, hosted journalists from various media organisations in Ghana to respond to their questions on the performance of his government in the first year and the general state of affairs in the country.

Commonly referred to as “Presidential Media Encounter,” the event is the second since the President assumed office on January 7, 2017. The first media encounter was held in July 2017.

The Media Foundation for West Africa (MFWA) sees the exercise as an important initiative that helps to deepen the culture of democratic governance in Ghana. The event serves as a platform that allows the President to account to the people on his stewardship. We, therefore, commend the President and the government for following the footsteps of predecessor governments as far as the regular media encounters are concerned.

In order to help guide post-event reflections on the usefulness of the event and to provide useful insights for future events, the MFWA presents its perspectives of today’s media encounter. The analysis assesses the overall arrangement and format of the event, quality of the questions that were asked, the quality of the President’s responses to the questions and makes some recommendations for future encounters.

Thus, this document is presented with the following sections: format of the event; quality of questions asked; critical missing pieces, the President’s performance and recommendations.

Format of the Event

The event was generally well organised. The President was well composed, articulate and created an atmosphere of conviviality throughout the event. The President’s introductory address was, however, too long and tended to focus nearly exclusively on the achievements of the government with almost no focus on failures, missed targets and challenges.

The procedure on selecting those to ask questions could have been better coordinated right from the beginning. For example, an expectation was created that there would be an opportunity for journalists from each of the regions to ask a question but it did not turn out so. However, the effort to ensure gender balance in the filing of questions is commendable.

The following three questions were found to be the best of the day:

1 “I take it that given the size of the economy you couldn’t have addressed all issues in your opening statement and so I take it that the issues you raised are on your priority list. However, there is one issue that I find not addressed in your address, which I think without it can bring every plan of yours to nought. It’s the issue of security. In 2014, a young man known as Alema was alleged to have joined ISIS. In fact, his family confirmed that story. In 2016, security experts revealed on GBC 24; in fact they showed us evidence of how some members of ISIS were getting in touch with some young Ghanaians. Just a couple of days ago, the Ghanaian police arrested some persons with seven grenades. You didn’t address that. Mr President, how safe are Ghanaians under your watch?” – Abdul Hayi-Moomen – GBC

The question was relevant and purposeful. The questioner provided useful background and context. It wasn’t framed in a close-ended way and asked with clarity.

2. “I would like to find out how you could have come to the conclusion that the Ministry of Trade has been cleared of the extortion allegations that were made – frivolous or otherwise – when indeed the parliamentary committee has just began its work. What is the basis of your conviction that the Ministry has been cleared of the allegations?” – Kwesi Pratt – The InsightNewspaper

This was a very useful follow-up after the President had sought to dismiss the usefulness of the on-going bipartisan parliamentary enquiry on the issue of “cash for seats.” The question was clear and precise. 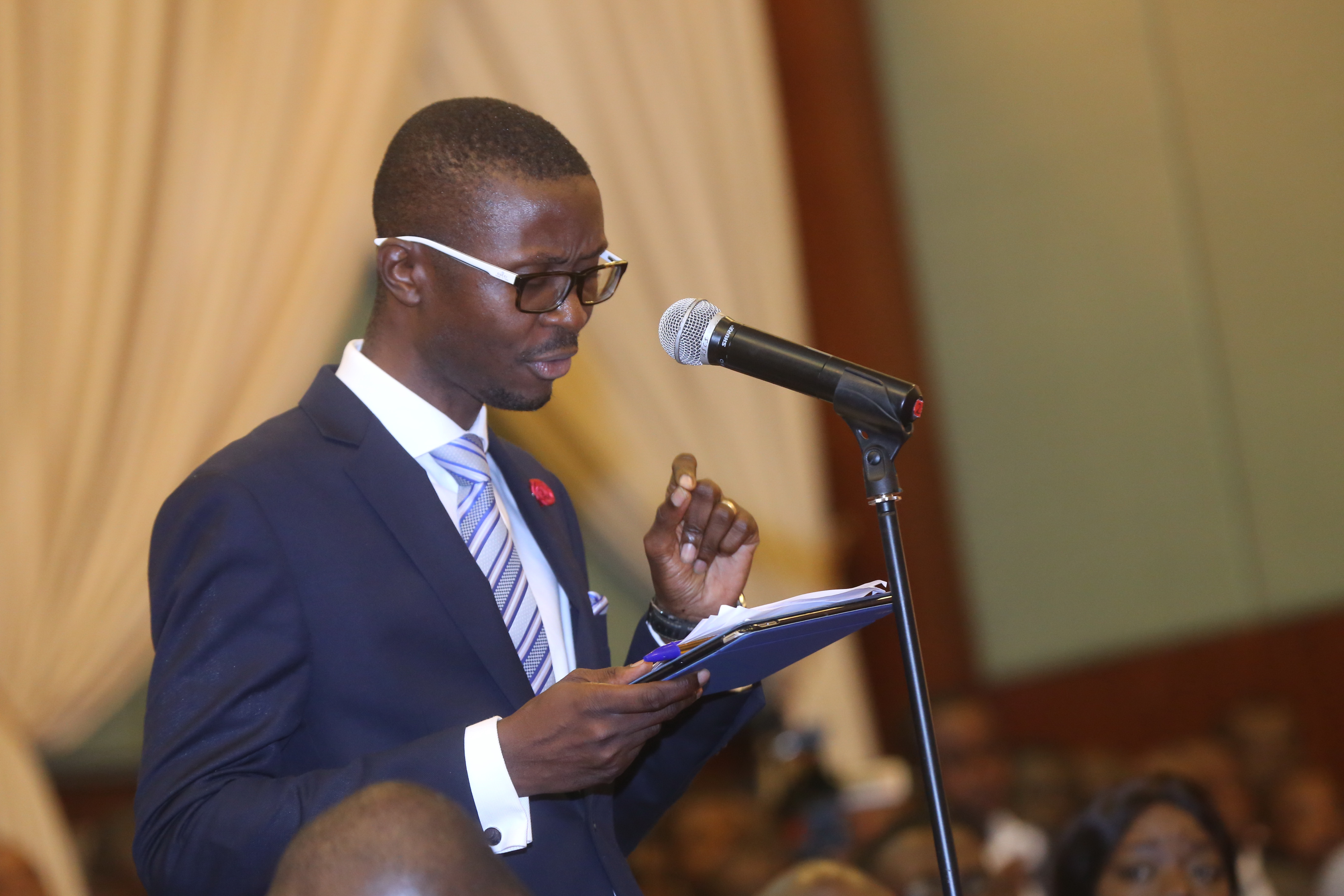 3.“I remember the vice President said and has said so many times that we are building a modern formal economy premised on National ID, Digital Address and mobile payment interoperability; and in February 2017 in your State of Nation address, you said and I quote the process for a comprehensive National ID System and the property titling system will be completed this year. When we met here in July 2017, you repeated the National Identification scheme will be working by the end of the year as promised and the digital address system will be functioning; end of quote. So two weeks into January, what is the state of the National ID and the mobile payment interoperability system?” – Bernard Avle, Citi FM

The questioner provided good background and context including quotes. It was a question that probed the delivery of the government on key promises and its failure to meet publicly announced deadlines.

The following were found to be the worst questions asked:

“We are in the 25th year of the 4th republic and 2012/2013, you led the NPP to the Supreme Court, the petition, I will like to find out whether the live coverage, the outcome and the immediate consensus or acceptance of the ruling is a major hallmark of the 25th anniversary of the 4th republic” – Gordon Asare Bediako, TheNew Crusading Guide.
By far, this was the worst question of the day. It lacked relevance and context.

“My question is, something unprecedented happened in Ghana here, that is during your first year, that is the coming in of visitors mostly Presidents. Classical example was the Emir of Qatar, President Macron and all those people coming in. In your view Mr. President, what do you think accounted for their interest in coming into Ghana, especially in your first year” – Naana Ntiri, Peace FM
While there may have been a number of foreign dignitaries coming in at the same time it cannot be described as an unprecedented phenomenon. It appears to be a question that sought to provide an opportunity for the President to tout the achievement of his administration.

“Mr President, there is this school of thought that believe that incumbency is advantaged, disadvantaged sorry its disadvantaged and I want to have your view on that” – Prince Godfred Obeng, Ark FM
The question was not clear. It lacked purpose and relevance as no context was provided.

“Mr. President, thank you for the opportunity and I want to commend the hard work that you have put in galamsey fight because it has really yielded results. Mr. President, my question and I want to refer to the question on Ghana beyond aid. Because we don’t know or we don’t have a vision of where Ghana wants to be in the long term, when policies are introduced by political parties a lot of questions are raised about them, all the sectors have their own plans but we don’t have a vision as to where they rise to. The US President has made very derogatory comments about us, people were up in arms but I must say it’s rather a painful truth because of the way we do our things. Mr. President the question I want to ask is when are we having a national plan?” – Annie Ampofo, Group Nduom Media.
The background to the question lacked focus and what ultimately was the question was factually incorrect because Ghana has a development plan as was alluded to by the President in his response.

The question on the menace of vigilante groups asked by Eyram Bashan of EIB Network was a question on a relevant issue. The value of the question was however undermined by the questioner’s reference to the weak capacity of the security agencies to deal with the issue. The President in his response then makes reference to the weak capacity as cited by the journalists as part of the challenges in dealing with the menace.

Kojo Yankson asked a question about the justification for the appointment of 110 Ministers and whether or not it was time for the President to reduce the number. Given that it was one of the issues that the President had already addressed in his introductory remarks, that question had become redundant.

Other Critical Issues that were missed

Free SHS blueprint and the sustainability of the initiative
The delay in the passage of the RTI despite promises and deadlines
Health – increasing prevalence of HIV infections; recent health challenges in second cycle institutions; state of National Health Insurance
The Digitisation of institutions and services versus challenges of cyber security

Overall, the President was composed and demonstrated knowledge on many of the issues around which questions were raised. In cases where the President did not have an idea or could not respond to a question, he demonstrated honesty. For example, he made it clear that the 2014 World Cup Committee White Paper was not on his radar. He also admitted the inability of his administration to meet the deadlines on the issuance of the National ID and the rollout of the mobile interoperability system. In some instances, he relied on his sector ministers to deal with specific questions relating to specific sectors, which we deem a good strategy.

The worst moment in the president’s responses was his attempt to discount or dismiss the on-going bi-partisan investigations into what has become known as the “cash for seat” saga. Indeed, the President’s comment devalues the on-going work of the bi-partisan committee. This is especially so because the President in his introductory remarks took pride in the fact that under the first year of his administration, a number of bi-partisan investigative committees have been set up to investigate allegations of wrongdoing.

Journalists should prepare adequately and have questions that have been well researched with proper background and context.
Journalists should endeavour to ask follow-up questions when earlier questions by others have not been answered satisfactorily.
More time should be allocated for questions in future encounters.

Two Fined For Fighting Over Woman On Court Premises

Unemployment Data to Be Ready In 3 Months – Nana Addo