We’re in a digital revolution. It’s quite an exciting time; not everyone in the history of the world gets to live through a revolution. Klaus Schwab of the World Economic Forum has dubbed it the 4thindustrial revolution, and general chatter of our living revolution revolves around automation, the replacement of jobs, supercomputing, robots, neurotechnological enhancements, and how AI and machine learning are going to take over the world. As with previous revolutions, they have their pains and positives: there will be (and arguably already is) a huge impact on the jobs and skills demanded in the workforce.

The positive outlook is that there are a lot of opportunities for new skills and jobs as well as the potential for innovation, which we’re already seeing in many industries such as transport, finance, and retail. The negative outlook is that a lot of people will be out of work with a skillset that is no longer valuable in the economy and they’ll have to learn new skills. Data from McKinsey Global Institute predicts by 2030, 54 million Americans will have lost jobs to automation and will thus need re-skilling:

When there are technological revolutions such as the one we’re all living in, massive implications for education and learning launch to the forefront of addressing how to prepare young people for the real-world and how to re-skill a large population whose skills the workforce no longer needs. Education in America has not seen a revolution or even significant changes in hundreds of years, and it’s now largely out-of-date though there are a growing number of startups and organizations attempting to address macro and micro-level challenges.

Technology and the economy today is changing faster than the traditional education system can keep up because the system is inflexible, largely due to its structure. It’s somewhat ironic as research organizations and academics hail the importance of digital transformation, yet the education system at K12 and higher education levels are struggling to implement their own advice. They are perhaps suffering from the “duality of digital”: failing to understand the degree and pace of change. It’s great that some universities have added classes on blockchain, but as a whole, the US (hailed for its educational institutions) has not responded to the need for 21stcentury talent needed for digital transformation: data scientists, product managers, software engineers and software architects, and managers/executives who understand technology. It’s also not just about quantity, but about quality talent as a recent Hackernoon article pointed out. Granted, the US isn’t alone in addressing its skills gap and changing education to keep up with real-world demand. But equally, countries such as Finland, Australia, Singapore, and China are arguably well ahead of us. 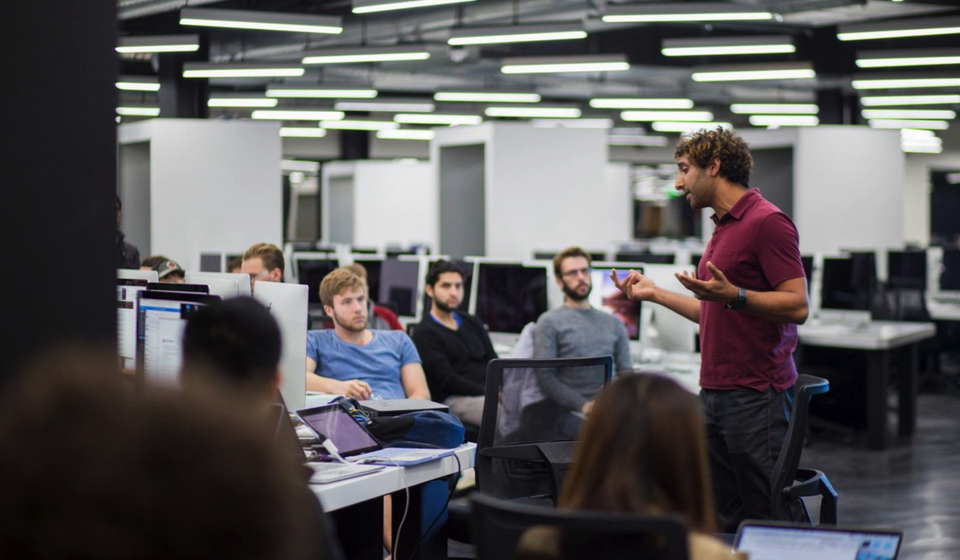 Peerbus Innovation Lab conducting a blockchain workshop and coding session with students at 42 in Freemont, CA

It’s not just that the economy has changed and that markets are demanding new skills or creating new jobs: it’s that access to knowledge has changed and knowledge is no longer dependent on being transferred from a teacher or professor. If you want to know something, you probably Google it. If you want a quick lesson, you go to a MOOC, you find an open publishing source or search around for article PDFs, or you go to YouTube and find a video by a (potentially self-acclaimed) subject matter expert.

Learning Without Time Barriers or Degrees Lessens the Skills Gap

What’s interesting is how companies, society, and the economy are responding to the skills gap outside of the American education system. We’ve seen the growth of microcredentials, micromasters, competency measurement such as HackerRank, and other education options, with fair success displayed by the likes of Minerva, Coursera, Udacity, and Udemy. Microsoft launched its own professional degree program in 2016 with its initial offering of data science – no surprise, because it can’t find enough data scientists and can’t rely on 4-year degree programs to churn out graduates fast enough or in large enough quantities. The Global EdTech Landscape Report does a great job on highlighting credentialing startups and companies as well as those serving open learning, proprietary learning, and bootcamps – all means of essentially addressing the skills gap outside of accredited degrees that take time and money.

Bootcamps are interested because they’re shorter time periods for learning new skills, though I would argue that their approach to education isn’t developing 21st-century skills that the workplace requires but are instead providing a surface-level solution that will lose value as soon as programming languages change. What’s also interesting are those schools and organizations directly targeting 21st-century and digital skills such as Codeacademy, 42, Minerva, and Axonify. We’re on the way to re-thinking education that develops 21st-century skills, but we’re far behind using the best educational and psychology research and design thinking to address our own skills gap.

I’d argue that the average person is grossly underestimating just how much the world will become digital and the job landscape will change in the next 20-30 years, let alone the next 50 years, largely because they haven’t given it much thought. Right now, we don’t have enough software engineers, developers, product managers, data scientists (or rather data lovers), digital designers, and there’s no prospect of changing through the traditional education system in a timely manner that simultaneously achieves diversity in the workforce and better innovations. The coding, mathematics, and soft-skill development at the K12 level isn’t anywhere near enough to create a pipeline for college-level learning, meaning we also need to address building accessible 21st-century education options at the K12 level. What America needs are digital education training powerhouses that aren’t restricted to 4 years for a bachelor’s or 6 years for a master’s. To put it in perspective, the 54 million people whose job McKinsey predicts to be lost to automation by 2030 is more than the number of students who began K12 education at the start of the 2017-2018 school year. Perhaps it is no surprise that LinkedIn acquired Lynda.com, but we need to foster and create scalable learning options now that focus on skills for a digital economy. Truly, for the sake of the American economy, we need to re-examine how people learn and creating lifelong learners in the face of an ever-changing world.

It’s not just about having educational options that are scalable for digital jobs in our digital economy. It’s also about making education and re-skilling accessible for everyone: from the child to the adult whose skills aren’t valuable anymore. In order to achieve digital transformation, succeed in the world’s digital revolution, and arguably help our economy, we must consider a more flexible, accessible, and timely means of learning the skills for our digital economy. What I’m left wondering is what can we do to foster and create solutions to the rather large learning problems in front of us?

World Vision advocates for improved sanitation and hygiene in schools