A US man died when a vape pen blew up and projected fragments into his skull, a post-mortem examination has found.

Tallmadge D’Elia also suffered burns over 80% of his body in a fire on 5 May caused by the exploding e-cigarette, according to forensic officials.

The 38-year-old’s body was discovered by firefighters in the burning bedroom of his family home in the beach resort of St Petersburg, Florida. 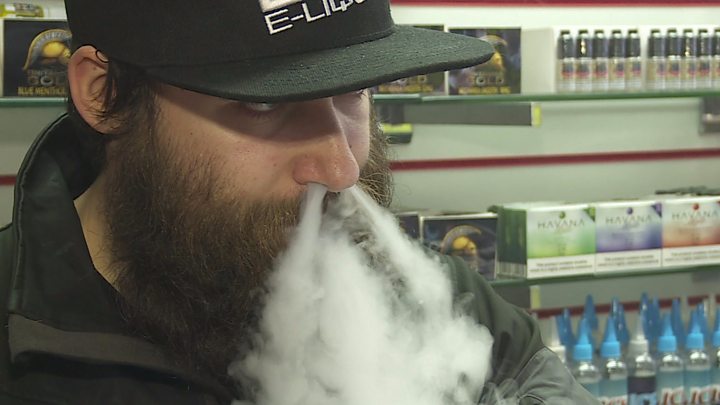 It is believed to be the first US death from a vape pen explosion.

The television producer’s death has been ruled an accident.

How did the device explode?

It’s not entirely clear and is not written in the post-mortem examination report.

The vape pen that Mr D’Elia was using was modified, meaning it allowed the user more access to the battery and did not regulate the voltage in the same way as other e-cigarettes.

The president of the American Vaping Association told the New York Times that most other e-cigarettes have more safety features than so-called mechanical mods. Such safety features can include computer chips.

A representative of the manufacturer, Smok-E Mountain, blamed the device’s battery for the explosion when speaking to ABC Action News. They also said it might have been down to the mouthpiece.

Vape pens use lithium-ion batteries, favoured in smartphones and other portable electronic devices because they can provide high amounts of electricity using little space.

They are used throughout the world with few incidents, but in 2016 Samsung halted sales of the Galaxy Note 7 phone because some were catching fire when the batteries short-circuited.

According to the US Fire Administration, between 2009-16 there were 195 separate incidents of explosions and fires involving an e-cigarette, resulting in 133 acute injuries, 38 of them severe.

In 2015, an e-cigarette exploded in the face of a 29-year-old Colorado man, breaking his neck and shattering his teeth.

A fire in January this year at Denver International Airport was blamed on a vape pen’s lithium-ion battery.

For safety, the Food and Drug Administration (FDA) in the US recommends: