Ghana and Nigeria are the two countries with the highest search interest in abortion pills, according to data provided by Google.

The data which has been analysed by the BBC indicates that global online searches for abortion pills have more than doubled over the last decade.

The findings, according to the BBC, also suggest that in countries where abortion laws are more restrictive, there is greater search interest in abortion pills.

The report also stated that women are increasingly turning to technology to sidestep legal barriers to abortion.

This is the modern face of the so-called “DIY abortion”.

Ghana only allows abortions in cases of rape, incest, foetal impairment or to preserve a woman’s mental health.

Nigeria is stricter still: abortion is only allowed in situations where a woman’s life is in danger. 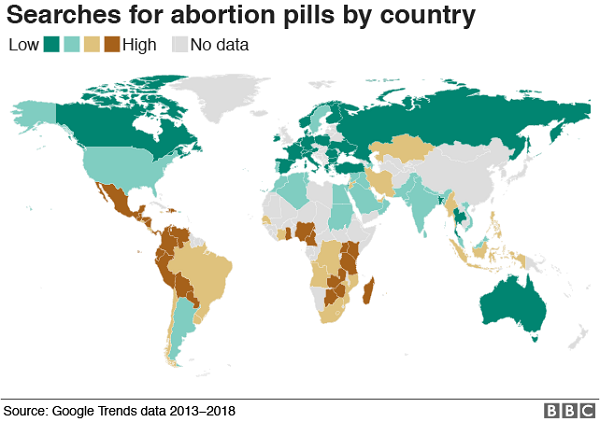 However, the BBC analysis indicates that countries with the strictest laws, where abortion is allowed only to save a woman’s life or banned altogether, have over 10 times higher search interest in abortion pill Misoprostol compared to countries with no restrictions.

Of the 25 countries with highest search interest in Misoprostol, 11 are in Africa and 14 in Latin America.

There are two main methods of inducing abortion; surgical and medical.

A medical abortion typically involves taking a combination of pills, Misoprostol and Mifeprostone, to induce a miscarriage. Misoprostol can also go by brand names like Cytotec.

Analysing Google data doesn’t just show the countries where search interest is highest. It can also show how often exact phrases are searched about a topic.

“Abortion pills” is a top search phrase on abortion in all the countries analysed by the BBC.

“How to abort” is the most commonly asked question in more than two-thirds of countries.

Alongside abortion pills, women are also turning to their search engines to source alternative methods to self-induce abortions.

In half of the countries analysed by the BBC, at “home remedies for abortion” was a top search related to abortion.

Falz Unfazed by Threats Over ‘This Is Nigeria’ Video