Management of the Ghana Institute of Journalism (GIJ), is taking steps to build new lecture halls and hostels for the school at North Dzorwulu in the Greater Accra Region.

The Institute, which has a student population of about 2,000 has its campus located at Ridge near the Accra International Press Centre.

GIJ has been operating for the past 59 years, and received a charter to become a fully fledged university in 2009.

It has few lecture halls but no hostel facility.

Its students are thus compelled to go for lectures from home or depend on services of private hostel facilities which are said to be expensive.

The school is thus seeking to develop a five-storey building and a hostel complex on the new site at North Dzorwulu. 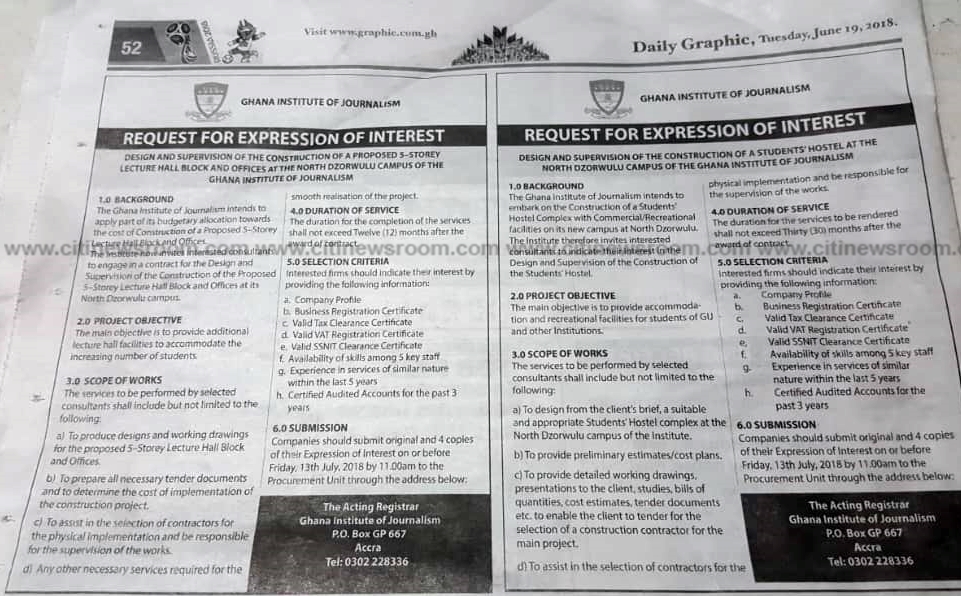 The new campus is expected to among other things have commercial and recreational facilities, and will be funded from the institute’s budgetary allocation.

The institute in an advert in the Daily Graphic Newspaper on Tuesday invited consultants interested in undertaking such projects to come on board.

“The Ghana Institute of Journalism intends to apply part of its budgetary allocation towards the cost of construction of a proposed 5-storey lecture hall block and office. The Institute now invites interested consultants to engage in a contract for the design and supervision of the construction of the proposed 5-storey lecture hall block and offices at its North Dzorwulu campus.”

“The Ghana Institute of Journalism intends to embark on the construction of students’ hostel complex with commercial or recreational facilities on its new campus at North Dzorwulu.”

GIJ in the publication said it is taking such move “to provide additional lecture hall facilities to accommodate the increasing number of students” and also provide “accommodation and recreational facilities” for its students.

The Ghana Institute of Journalism was currently in the news for advertising its rector’s position as vacant despite announcing that he, Dr Wilberforce Sefakor Dzisah, is on leave.

The Rector, according to GIJ, proceeded on a “voluntary annual leave” in December 2017, following allegations of infractions in procurement practices and other issues.

A four-member committee was subsequently tasked to investigate the issue.

Head of Communications Department at the Institute, Dr Modestus Fosu, was asked to serve as acting rector, whereas the acting Deputy Rector, Ebow Afful, was also asked to return to the classroom to teach and resume his role as head of the department.

The Registrar of the Institute, Perry K.K OFosu, was also ordered to proceed on leave.

Yvonne Nelson Opens Up On Her Political Ambition