The European Commission said the firm had used the mobile operating system to illegally “cement its dominant position in general internet search”.

The firm’s parent Alphabet has been given 90 days to change its business practices or face further penalties of up to 5% of its average daily turnover.

However, the firm has said it plans to appeal.

In a statement the regulator said Google had “denied European consumers the benefits of effective competition in the important mobile sphere.”

Google’s parent Alphabet can easily afford the fine – its cash reserves totalled nearly $103bn at the end of March.

However, it believes the punishment is unjustified.

“Android has created more choice for everyone, not less,” said a spokesman.

“We will appeal the commission’s decision.”

Ms Vestager previously fined Google €2.4bn ($2.8bn; £2.1bn) over a separate probe into its shopping comparison service – a ruling the tech firm is in the process of appealing against.

In addition, her team has a third investigation underway into Google’s advert-placing business AdSense.

What is the case against Google?

Ms Vestager alleges that there are three ways that Google has acted illegally:

But she said that only 1% of users downloaded a competing search app and 10% a different browser.

“Once you have it, it is working, very few are curious enough to look for another search app or browser,” she said.

What does the regulator want Google to do now?

The Competition Commissioner said that Google carried out its abuse at a time when the mobile internet was growing quickly, helping it ensure its advertising-supported search service repeated the success it had already found on desktop computers.

She cannot turn the clock back, but said the size of the fine had been based on the firm’s search-related earnings from Android devices in Europe since 2011.

She has, however, said the firm must now stop all of the practices outlined above and refrain from any measures with a similar goal.

Russia may give one example of how this could be achieved.

After similar complaints by the country’s regulator, Google now offers Android users a choice between Google, Yandex and Mail.ru as the default search engine the first time they use the Chrome browser.

Yandex in particular has benefited from this.

Since the change in June 2017, the Moscow-based firm has seen its share of mobile search rise from about 34% to 46%, according to Statcounter.

What has the reaction been?

The European Commission first began scrutinising Android in April 2015, after a complaint by Fairsearch – a trade group that originally included Microsoft, Nokia and Oracle among its members.

It claims the case has dragged on so long because Google had used “every trick in its book to delay action”.

But the group welcomed the commissioner’s intervention.

“This is an important step in disciplining Google’s abusive behaviour in relation to Android”, said spokesman Thomas Vinje.

“It means that Google should cease its anticompetitive practices regarding smartphones, but also in other areas – smart TVs, in particular – where it is foreclosing competition by using the same practices”

The European Commission had the power to fine Google up to 10% of its annual revenue. Based on its last annual report, that would have amounted to $11.1bn (£8.5bn).

The €4.3bn figure is, however, a record-sized sum for the commission. 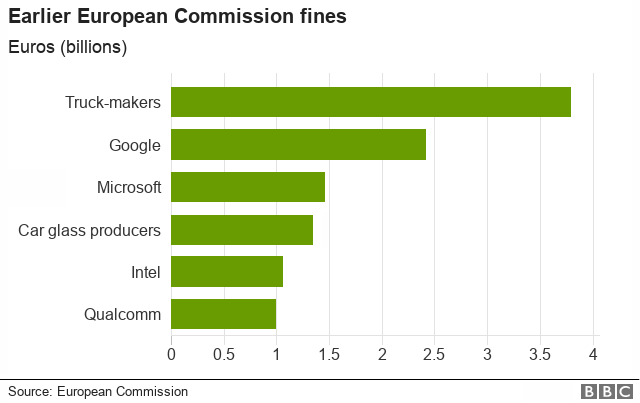