Is he really a good match for you?

If you’re wondering how to find your soulmate, or how to know if he’s the one, you can try using palmistry, or palm reading, to figure it out.

At a certain point in any relationship, it’s easy to begin to wonder how you’ll know if he’s the one for you; a true soulmate to share the rest of your life with.

But how can you tell if he’s really “the one,” and are there soulmate signs you should watch out for?

Yes! People have many different “soul mate” possibilities. The important part of figuring out whether or not you’ve met one of your soul mates is easy, though, if you know a little bit about how to read his hands for clues.

When most people think of palmistry, they imagine someone staring at your palm and telling you if you’ll be famous, or wealthy, or who you’ll marry.

But palmistry is so much more than that, and the secrets it can reveal — when you know where to look — might just surprise you.

Everyone has different needs in a relationship, and your soulmate match depends as much on you as it does on your partner. There are certain personality traits that may be important to you, whether or not he’ll be nurturing, or even if he is just a good-hearted person.

His hands hold all of these secrets and more. A man’s hands are his tools; an important part of him.

And they’re a great way to glean aspects of his deeply held personal beliefs, which will help you determine if he’s really someone that you can see a lifetime of bonding and soulmating with.

Here are 6 things to look for in a man’s hand that prove you’ve found “the one” and he’s really your soulmate:

The area next to his thumb, the flat, slightly puffy part of the hand, is what’s known in palmistry as a “Venus mount.” The area opposite it is called the “Luna mount.”

These portions can tell you a lot about a man’s personality, but interestingly enough, it can also tell you how much or little love he has to give you.

The mounts of the hand should be full and “elastic” — meaning when you press on them, the skin springs back fairly easy.

Too soft or firm can indicate some emotional hang-ups. “Puffy” just means that it protrudes from the palm a bit.

A healthy set of Venus and Luna mounts means that he’s going to be good at giving — and receiving — love in your relationship. 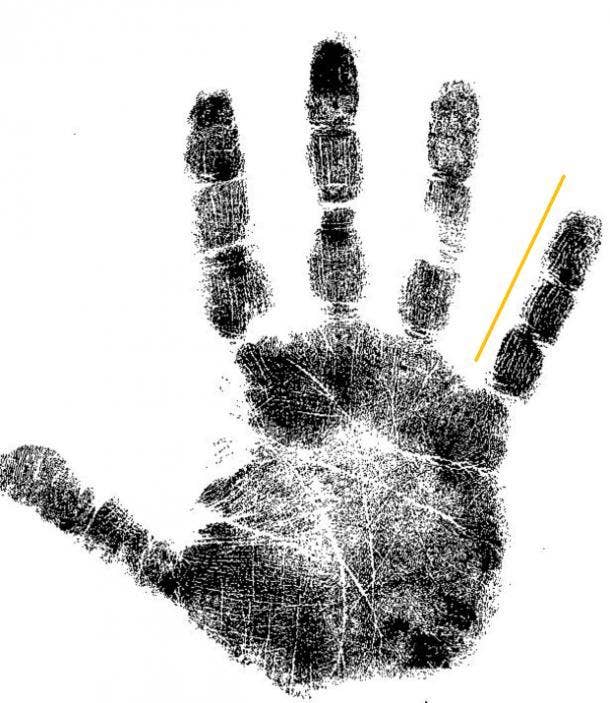 For the most part, you can tell a man’s honest because what he says and does match up pretty well.

But if you want to know if he leans toward honesty as a core value of his personality, then you’ll need to look to the smallest finger on his hand.

His little or “Mercury” finger is all about how well he communicates and how trustworthy he is.

If you want to know whether or not your guy is a straight shooter, check out the curve of his Mercury finger. The straighter it is, the more he’s prone to honesty in all things.

When a little finger is curved or bent at an angle, it suggests that there might be some dishonesty or manipulation there, and you should proceed with caution.

Be mindful, however, of the fact that former injuries or breaks in the finger could also have caused an issue with how the finger grew, and that issue is likely long over by now.

Ambition is important in life, and not just for how likely he is to get a better job or climb the company ladder, either.

Having high ambition means that he wants to pursue his life goals, whether those goals are work-related, personal, or even spiritual. It’s an important aspect of someone’s personality.

So if you want to know your guy’s desire to ambitiously pursue the things that bring him passion in life, look to two places on his hand: His aspiration line and his thumb.

An ambitious man’s hand will have a sufficiently large thumb that’s long and practically flexible—though not overly so!

The aspiration line rises up close to the Jupiter or “index” finger from your life line on your palm.

These lines can come and go as you age, so even if your guy doesn’t have a major ambition line right now, that can always change!

These lines are, however, a good sign that he’s a go-getter who knows what he wants out of life.

4. Is he dependable and supportive?

If you want to know how well he’ll support a family and how stable he’ll be in the future, you’re going to want to look to his “fate line” and his Saturn or “middle” finger.

The fate line typically indicates career paths, and oftentimes has several breaks in it, though these are not considered negative, like they would be in the heart line.

If this line extends in some form toward the middle finger from the base of his palm whether or not it’s long, it suggests continuous advancement and knowing one’s direction in life.

When examining his Saturn finger, you’ll want to determine which phalange is strongest, meaning which is the largest part of that finger on his dominant hand.

If it’s his upper phalange (the fingertip), it means he’s stuck in “research mode,” and more interested in mental pursuits.

If it’s his middle, then it means he’s interested most in organization and practical duties, and may be perhaps more career motivated.

If the lower phalange is largest, then he’s interested in home pursuits and creating physical comforts for himself and his loved ones.

5. Is he a good communicator?

There are a lot of jokes about men speaking less than women or needing to communicate more infrequently, but this isn’t necessarily true!

Men and women both have strengths and weaknesses when it comes to communication, and if you want to know about your guy’s ability to get his ideas out, you’ll have to take another look at the overall shape and phalanges of his Mercury (little) finger.

If his finger is shorter, that means he’ll probably have less focus or awareness on his communication—or lack thereof—and may be more focused in his singular interests as opposed to discussing areas outside of his realm of interest.

Men with a shorter Mercury finger may be very quiet until you bring up a topic they’re passionate about.

You’ll also want to check to see which of his phalanges are dominant.

If it’s his upper phalange, he’s likely creative; an “idea guy.” He thinks and speaks about a lot of topics and is interested in speaking and communicating with you about those ideas.

If it’s his middle phalange, again, he’s more likely to be business-oriented and task driven when it comes to communication.

He’s probably a great negotiator at work or on topics that interest him, but he may struggle when it comes to speaking on his personal feelings.

If his lower phalange is dominant, he’s less of a verbal communicator and more of a physical one. He communicates more with touch — hugs, kisses, sex, intimate moments, etc. — rather than by telling you his feelings.

By looking at the other parts of his hand, you’ll be able to tell how driven he is to achieve personal goals in life.

But by checking his Jupiter finger, you’ll be able to tell if he’s in tune with his dreams and spiritual needs and motivations. In other words, his “higher self.”

Jupiter represents your sense of self, so if a man’s Jupiter finger is straight, this suggests he’s balanced between the physical and spiritual parts of his personality!

The upper phalange is considered the “zone of ideals.” Ideally, this area should be clear of horizontal lines, which represent areas of stress in his higher self.

If there are no horizontal lines on this part of the finger, it suggests that there are no major stressors upsetting this balance.

However, lines here can come and go, so it’s not uncommon for any horizontal lines that are currently present to go away in time.

And, if his upper Jupiter phalange is also larger, it means that he prioritizes his beliefs and ideals over ambition or power.

Having a little knowledge of palmistry — and what to look for in your partner — will definitely tell you if his goals and passions in life line up with your own.

Is he your soulmate? Well … what do his hands say?

Every President is growing old, except Nana Akufo-Addo

Couples who share these 8 core values have the happiest relationship

10 small things that prove that your love is true

How to self-isolate if you think you have coronavirus