Ghana is loosing its mantle as the African economy likely to grow the quickest this year to Ethiopia, which has held the position for most of the past decade, International Monetary Fund data showed.

That’s lower than the 8.9 percent forecast in October, and is also less than the raised 7.4 percent estimate for Ivory Coast and the prediction for Ethiopia, which was held at 8.5 percent. 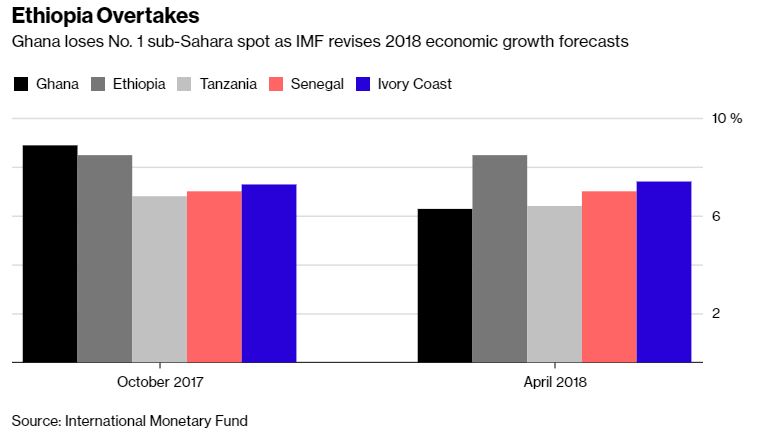 Commodities including oil, gold and cocoa are the mainstay of Ghana’s $43 billion economy, which surged 8.5 percent last year as the Sankofa crude field started up in May.

Its growth booms and busts have been closely linked to oil since it became a producer in 2010.

The IMF increased its forecast for expansion in sub-Saharan Africa to 3.4 percent this year and 3.7 percent the next “as the challenging outlook in commodity exporters gradually improves,” it said.

Nigeria, the region’s most-populous nation and top crude producer, will grow 2.1 percent, matching the lender’s estimate released in the Jan. 22 update to the outlook, while South Africa, the world’s biggest source of platinum, will expand 1.5 percent, more than the 0.9 percent prediction three months ago. The two economies account for almost half of the region’s GDP.

Forecasts from the World Bank and African Development Bank in January also showed Ghana would expand the fastest this year. The World Bank will publish an updated report on African economies Wednesday.