Former First Lady of Ghana Nana Konadu Agyemang Rawlings has revealed that she was not immediately attracted to her husband, former President Jerry John Rawlings when they first met at the Achimota School.

According to Nana Konadu, it took a while for them to develop the love and close bond they have now shared for over 40 years of marriage.

She made this known in a revealing interview with Peace Hyde as part of the Forbes Woman Africa series: Against All Odds on Thursday. 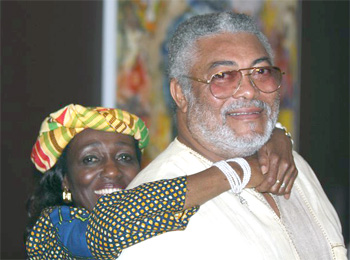 She said: “With Jerry Rawlings, the former president of Ghana and I, it was not love at first sight. He grew on me”.

She added that she never expected that she was going to become the First Lady of Ghana and “just landed the position”.

“I cannot say I knew I was gonna be first lady, I just landed the position…

She schooled at Achimota School, where she met her future husband Jerry John Rawlings. She continued at the University of Science and Technology, where she read Art, specializing in Textiles. She was a student leader and an executive of her Hall of residence, Africa Hall.

Nana Konadu got married to her sweetheart, Jerry John Rawlings, an Airforce Officer, in 1977. She gave birth to her first child Ezenator Rawlings in 1978. Two other daughters and a son followed later; Yaa Asantewaa, Amina and Kimathi.