Janet Jackson made her stance on the #MeToo movement clear as she won the Icon prize at the Billboard awards.

“I believe that, for all of our challenges, we live at a glorious moment in history,” she said.

“At long last, women have made it clear that we will no longer be controlled, manipulated, or abused.

The singer, whose 1986 breakthrough album Control, dealt with themes of feminism and taking charge of her own identity, has previously sung about domestic abuse on songs like What About and Lessons Learned. 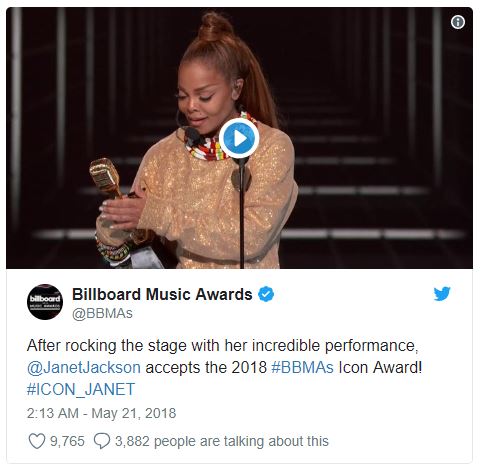 The 52-year-old was the first black woman to receive the Icon Prize, as Bruno Mars pointed out while welcoming her to the stage.

“The Jacksons are music royalty and the first family of entertainment. She is an activist. She’s a humanitarian. She’s a powerful woman.”

The singer went on to perform a medley of Nasty, If and Throb – in her first televised performance in the US for nine years.

She is one of the most successful artists of all time in the US, with 27 top 10 singles and 10 number ones. She is also one of only four acts to score a number one album in each of the last four decades.

As the crowd chanted her name, Jackson said she hoped faith could help heal the divisions caused by a tumultuous time in global and personal politics.

“My prayer is that, weary of such noise, we will turn back to the source of all calmness, that source is God. Everything we lack, God has in abundance: Compassion, sensitivity, patience and boundless love.”

Jackson is only the seventh artist ever to win the Icon award – following in the footsteps of Prince, Stevie Wonder, Celine Dion, Cher, Neil Diamond and Janet’s former backing dancer Jennifer Lopez.

Other prizes on the night went to Ed Sheeran, Taylor Swift and Kendrick Lamar; while there were tributes to dance musician Avicii and the victims of the Santa Fe High School shooting.

My Problem with Zylofon Media is Not Shatta Wale – Stonebwoy