Japan’s new emperor pledges to be symbol of unity

Japan’s Emperor Naruhito has pledged to fulfill his role as a “symbol of the state and unity”, in his first public address since taking the throne.

The 59-year-old was speaking as he officially began his reign on Wednesday in a short but symbolic ceremony at the Imperial Palace.

He is the first Japanese emperor to stand down in more than 200 years.

Akihito, who will now be known as Emperor Emeritus, had endeared himself to many Japanese people during his reign through his interactions with those suffering from disease and disaster. 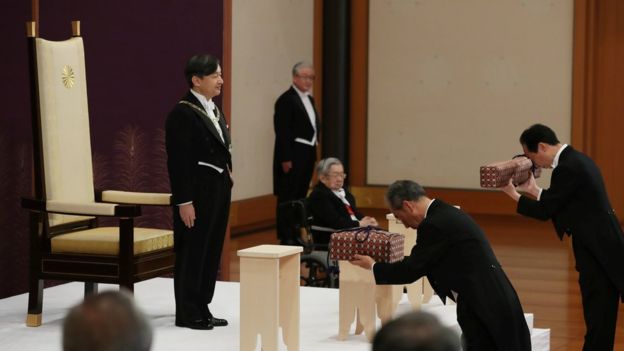 In his speech, Emperor Naruhito paid tribute to his father while pledging to show the same devotion to his people.

“[Akihito] showed profound compassion through his own bearing,” he said.

“I swear that I will reflect deeply on the course followed by the Emperor Emeritus … and fulfil my responsibility as the symbol of the state and of the unity of the people of Japan.”

What happened at the ceremony?

Naruhito technically became emperor at the stroke of midnight when his father’s reign came to an end – marking the start of the new Reiwa era.

But on Wednesday morning his place was formalised as he symbolically took possession of the sacred imperial regalia – a sword and a gem – that have been passed down through the generations.

Japanese emperors do not wear a crown so these treasures, along with a mirror, act as a symbol of imperial power.

However the items used in the ceremony are duplicates – the real objects are kept in shrines around the country and never seen. 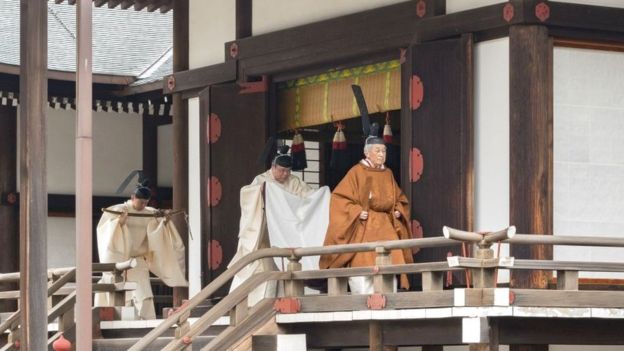 What do we know about the new emperor?

Emperor Naruhito and his wife Masako Owada, a former diplomat, are expected to be more modern in their outlook.

The Oxford-educated royal said in a news conference in 2017 that he believed “that just as new winds blow in every age, the role of the imperial family changes in each age”.

“I would like to learn various things from the past while also pursuing the ideal role that the Imperial Family should take in the future,” he said.

However, he is expected to carry on his father’s legacy – working to replicate the sense of closeness to the public that Emperor Akihito had built up.

The Emperor and Empress reportedly met at a tea party and married in 1993.

Empress Masako was educated at Harvard and Oxford, and had a promising career as a diplomat before her marriage.

Empress Masako later told reporters that she had accepted Naruhito’s proposal after he said: “You might have fears and worries about joining the imperial household. But I will protect you for my entire life.”

They have one child, Princess Aiko, who was born in 2001. But Japanese law prohibits women from inheriting the throne.

Empress Masako has struggled to cope with royal life and the pressure to produce a male heir.

She reportedly suffers from a stress disorder, and had admitted last year that she was “insecure” about becoming empress.

However, she has pledged to do her best to serve the people of Japan.

Naruhito’s brother Prince Fumihito will be next in line to the throne, followed by the new emperor’s nephew, 12-year-old Prince Hisahito.

Why is the Japanese monarchy important?

It’s the oldest continuing hereditary monarchy in the world. Legends date it back to about 600 BC.

In fact, Japanese emperors used to be seen as gods, but Emperor Hirohito – Naruhito’s grandfather – publicly renounced his divinity at the end of World War Two, as part of Japan’s surrender.

Today, the role is largely ceremonial and the emperor is barred from making any political statements.

Emperor Akihito is seen as having redefined the role, helping to repair the damage to Japan’s reputation after the war.

Previous emperors rarely interacted with the public, but Akihito broke down the barrier between the royals and the people – and came to be known for his compassion.

He also took up the role of a diplomat, becoming an unofficial ambassador for Japan and travelling abroad extensively – Naruhito is expected to continue this.

Akihito will now be known as “Joko”, which means “grand emperor”, and by the English title “Emperor Emeritus”, while his wife Michiko will be “Empress Emerita”.