The protesting jobless nurses and health professionals have given the government two weeks to act on a petition they submitted to the Health Ministry, demanding their financial clearance and a review of the Heal Ghana module under the Nation Builders Corps.

Like many other groups before them, they have threatened to picket at the Health Ministry if their demands are not met.

The nurses, who belong to the Ghana Nurse-Midwife Trainees Association and the National Health Students Association of Ghana, submitted the petition to the Deputy Health Minister, Tina Mensah, after a demonstration in Accra today [Monday], to convey their displeasure with the Heal Ghana module.

The National President of the Ghana Nurses and Midwives Trainees Association, Batiah Semi-Ulah Santo said, “we are giving the government two weeks to ensure that the financial clearance they said they requested for, and is still at the Ministry of Health and Ministry of Finance pending approval, should be made available for us to be employed as permanent staff.”

He also said the government should “do away with the Heal Ghana Module because we are not interested in it and we want to also state that the Deputy Minister should not keep this petition in her office. It should be forwarded to the office of the Vice President.”

During their demonstration, the jobless nurses threatened to vote out the New Patriotic Party government in 2020 if it did not listen to their demands. 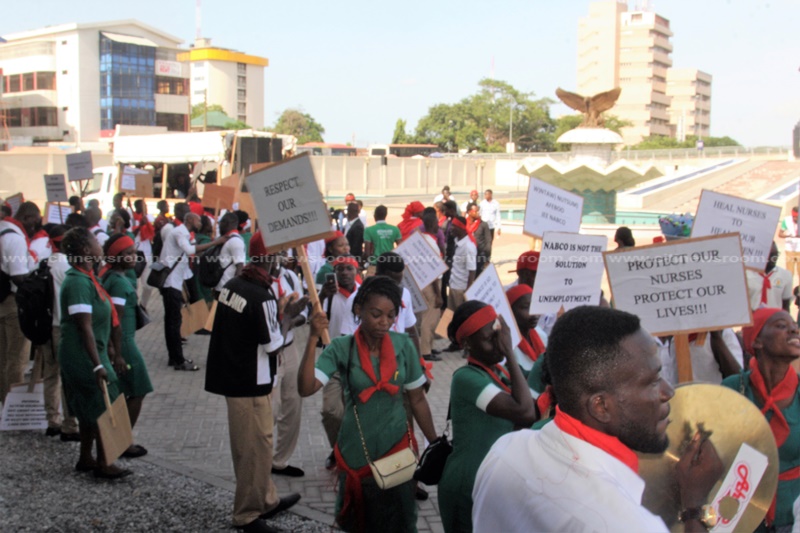 “He [President Nana Akufo-Addo shouldn’t worry. 2020 is coming. We voted him in and we will vote him out,” some nurses said to Citi News

“We feel like the government has lied to us. The government promised us financial clearance in May; not NaBCo. NaBCo is a stranger to us. It came all of a sudden and we are even shocked I don’t think anybody understands it.”

Despite their complaints, the government has explained that unemployed nurses who sign unto the corps will still be posted when they eventually receive financial clearance from the Finance Ministry.

The Coordinator of the Nation Builders Corps, Dr. Ibrahim Anyass, has stated that although there are openings for graduate nurses to be employed under the scheme, application for the jobs is not compulsory.

According to him, the project had been initiated by the government as a stopgap measure to allow graduates from tertiary institutions who had completed their mandatory year of National Service gain vital work experience, while ensuring that they continue to practice the skills they have learnt.

“Government has put in place a graduate employment scheme called the Nation Builders Corps. The Scheme is an enrichment process to add value to any graduate that seeks to become employable in the future in a permanent fashion. That does not replace the natural processes of recruitment in the public or private sector.  So the NaBCo project has nothing to do with stopping of clearances for future recruitment except that it guarantees you security to be able to use your talents to practice, especially those who have hands-on skills like nurses…What we are saying is that it’s not compulsory to get onto the Nation Builders Corps, it doesn’t stop your clearance. You are gaining some kind of integrity in terms of your professional practice by taking advantage of this scheme to practice while waiting for your clearance.”