Kan-Dapaah Can’t Stop Me! …His Letter Is Useless – Bawah

A confidential letter written by the Minister of National Security Hon. Albert Kan Dapaah cautioning the Vice Chancellor of the University of Education, Winneba (UEW) Rev. Prof. Afful Broni and Alhassan Salifu Bawah, a Lecturer at the same University to desist from tarnishing the image of the Akufo Addo led government has been described as “useless” by the very person the letter was meant to have cautioned.

Mr. Bawah’s reply to the National Security Minister was done through one of his several damning articles published on modernghana.com, a private owned news website.

The contents are rather defamatory and THE NEW PUBLISHER therefore considers it unethical to reproduce it in full.

Prof. Afful Broni , the Vice Chancellor is reported to be colluding with Alhassan Salifu Bawa to cause confusion at the University and also attacking the personality of the MP for Effutu, Alexander Afenyo-Markin and in some cases impugning criminality against him all in a bid to sabotage the New Patriotic Party (NPP) led government.

Already, Vice Chancellor Affull-Broni has been dragged to the office of the Special Prosecutor to be investigated on allegations of a misappropriated amount of GHc 5.7 million.

Even before dust settles on the supposed fraud allegation, the alumni and students of the University  have publicly insisted the Vice-Chancellor, Rev Fr Prof Anthony Afful-Broni, must either resign or get sacked for “wrongfully” dismissing some senior lecturers of the school and victimizing staff members he suspects would not bow his dictates.

Three months ago, the UEW had to be closed down temporarily following gunshots and destructive demonstrations by students of the school.

The students hit the streets to demand the immediate dismissal of the Vice Chancellor, Rev. Prof. Afful-Broni and the return of a number of wrongfully dismissed lecturers.

The Vice Chancellor has consistently denied all the allegations and said it is time for all parties to unite rather than apportion blame.

It is not clear whether the National Security Minister would cow into docility over the public bluff and challenge from Alhassan Bawa, or he would stick to his position and act on his letter. – MORE SOON

Read details of the letter below: 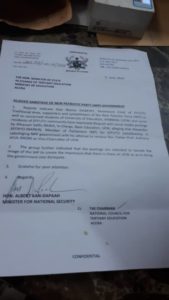 I Received Death Threats After Release Of ‘Kasiebo’ – Obrafour

We’re going to give Cameroon a good game – Kwesi Appiah

Pay Your Debt, Get Your Properties Back – CJ tells Woyome