Kim Jong-un is set to become the first North Korean leader to cross into South Korean territory since the end of the Korean War in 1953, as final details are put in place for the summit.

The historic summit will focus on the North’s recent indications it could be willing to give up its nuclear weapons.

Talks are also proposed between Mr Kim and US President Trump by early June.

Mr Kim is set to cross the military demarcation line – a clearly defined marker of the official land border between the territories. He will, however, remain within the Demilitarised Zone.

Seoul has warned reaching an agreement aimed at ridding Pyongyang of its nuclear weapons will be “difficult”, because North Korea’s nuclear and missile technology has advanced so much since the sides’ leaders last met more than a decade ago.

“The difficult part is at what level the two leaders will be able to reach an agreement regarding willingness to denuclearise,” South Korean presidential spokesperson Im Jong-seok said.

The meeting – the third of its kind following summits in 2000 and 2007 – is the result of months of improving relations between the two Koreas, and paves the way for a planned meeting between Mr Kim and US President Donald Trump.

Mr Kim announced last week that he would suspend nuclear tests for the time being. The move was welcomed by the US and South Korea as a positive step, although Chinese researchers have indicated that North Korea’s nuclear test site may be unusable after a rock collapse following its last test in September.

As well as addressing Pyongyang’s nuclear ambitions, the leaders are expected to discuss a path to peace on the peninsula to formally end the 1950-53 Korean War, and a series of economic and social issues.

South Korea and the US say they are suspending annual military drills for a day while the summit takes place.

How the summit will unfold

Every detail of the summit has been precisely planned – from the timetable to the dinner menu.

Mr Moon will meet Mr Kim and his delegation of nine officials at the concrete blocks which mark the demarcation line on the border, Mr Im told reporters on Thursday.

South Korean honour guards will then escort the leaders to a welcome ceremony at a plaza in Panmunjom, a military compound in the demilitarised zone (DMZ) between the two countries. 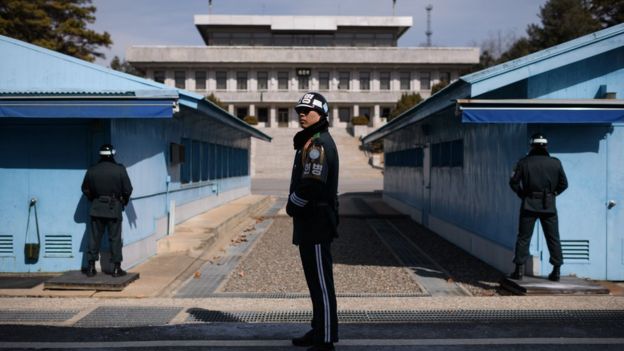 Official talks between Mr Moon and Mr Kim will begin at 10:30 local time (01:30 GMT) at the Peace House in Panmunjom.

The pair will break after the first session and will have lunch separately – with the delegation from the North crossing back to their side of the border.

At an afternoon ceremony, Mr Moon and Mr Kim will plant a pine tree using soil and water from both countries, to symbolise “peace and prosperity”.

100MW Ocean Power Plant to Be Constructed at Ada

President Attends SDGs Event in The US