Kwame A Plus heads Class Media

Social Activist, Mr. Kwame Asare-Obeng known popularly as Kwame A Plus has been appointed as the General Manager of Class Media Group.

The controversial musician made this known on his Facebook wall indicating a deal has been finalized as he heads to the media house to facilitate duties on a better note. 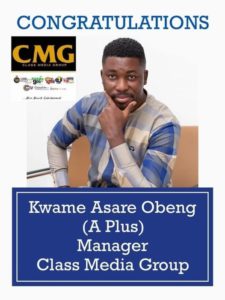 Nineteen years ago, A Plus made his public debut and popularity in the Ghanaian music industry. The creative artist took advantage of the then 2000 general elections, where he released a musical album named “Freedom of Speech.”

This was right before the elections started. His unique music style addressed the various political issues. This led to massive public acceptance hence his rise to fame. A good example is his 2000 hit song “Mesuro mpo na merekeka yi o,” that translates to “ am afraid of what I am saying, but I will say it anyway.”

In 2007, he released the rather sad song “A Letter to Parliament,” that had him nominated under the category of Best Hip-life Song during the 2008 Ghana Music Awards. The song got massive airplay on various radio stations.

Girl, 29 beaten for asking boyfriend to marry her