Stock markets have fallen around the world in the wake of President Trump’s latest tariffs threat to China.

The Dow Jones was down more than 300 points, or 1.6%, at the open after Asian and European markets fell sharply earlier.

Mr Trump has threatened to put tariffs on an extra $200bn (£141bn) of Chinese goods, sparking fears of a trade war.

The US president said the tariffs would be imposed if China “refuses to change its practices”.

He condemned China’s “unfair practices related to the acquisition of American intellectual property and technology” and added: “Rather than altering those practices, it is now threatening United States companies, workers, and farmers who have done nothing wrong.”

The markets reacted badly with China’s Shanghai Composite faring the worst in Asia, ending the day down 3.8%.

Away from Mr Trump’s dispute with China, Russia said it would impose tariffs on certain American goods in response to the recent tariffs placed on steel and aluminium imports by the US.

Russia’s Economy Minister, Maxim Oreshkin, said the tariffs would target goods of which the Russians already had domestic equivalents. 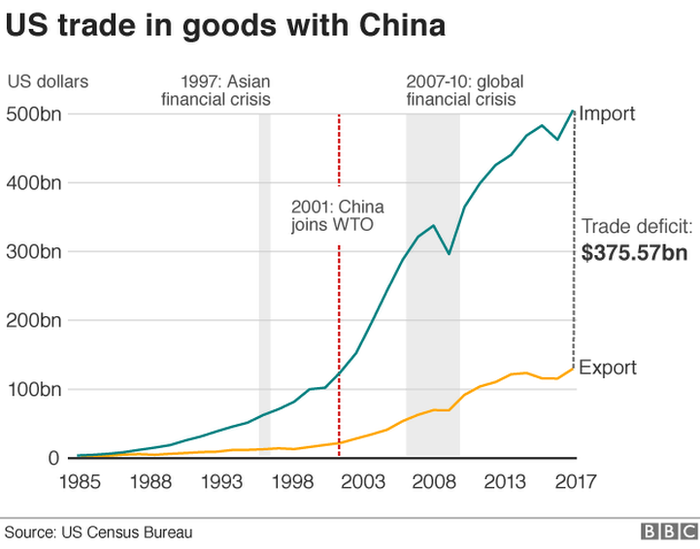 How did the latest spat unfold?

Last week, Mr Trump confirmed that the US would impose 25% tariffs on $50bn worth of Chinese goods.

Beijing responded by saying it would hit 659 US products worth $50bn – including agricultural products, cars and marine products – with a similar tax.

Late on Monday, Mr Trump added that new tariffs would “go into effect if China refuses to change its practices, and also if it insists on going forward with the new tariffs that it has recently announced”.

“If China increases its tariffs yet again, we will meet that action by pursuing additional tariffs on another $200bn of goods.”

China’s commerce ministry reacted swiftly, saying: “If the US acts irrationally and issues a list, China will have no choice but to take comprehensive measures of a corresponding number and quality and take strong, powerful countermeasures.”

A paper published by Canadian think tank the CD Howe Institute suggests that Mr Trump’s threats are having an effect on US manufacturing by using “uncertainty as a new weapon in trade protection”.

Its study says that uncertainty acts like a non-tariff barrier to impede trade and investment by encouraging American companies to move factories back to the US and reduce incentives for US firms to invest abroad.

And in a speech later on Tuesday, the UK’s international trade secretary, Liam Fox, will call on nations to stop using tariffs and similar measures as the first course of action in trade disputes.

Instead countries should collaborate through multilateral bodies such as the World Trade Organisation (WTO), he will say.

Dr Fox will say the WTO should be encouraged to “operate more effectively in supporting the global economy” and tackle a range of issues including transparency of ownership and intellectual property issues – especially forced technology transfer.

“China must play its part, opening its markets and ensuring compliance in all these areas.

“Unless we maintain an open and liberal global trading system, reducing tariffs and non-tariff barriers, we will put at risk future jobs, growth and prosperity.” 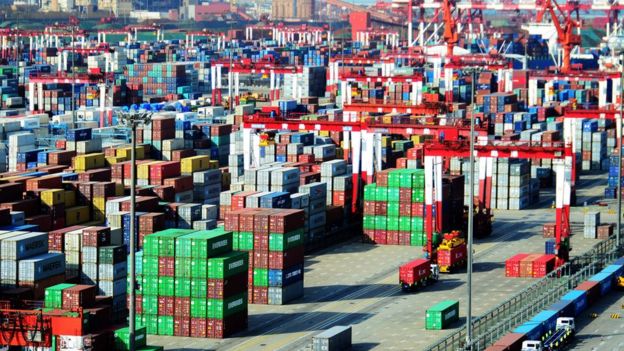 Being tough with China plays well with many of President Trump’s supporters, actual and potential, at a time when he is looking ahead to the Congressional elections in November.

It could also be that he thinks China will run out of US imports against which to retaliate.

After all, the US sells much less to China than the other way around.

But there is also a potential political cost for the president. Many in the Republican Party, who are more instinctively in favour of free trade, don’t think this is the right way to tackle problems with China.

And as Mr Trump increases the range of goods subject to tariffs it becomes harder for American importers and consumers to avoid the cost by finding alternative suppliers.

In the separate dispute about steel and aluminium tariffs, he also has to contend with the politically targeted retaliation that other countries such as Mexico, Canada and the EU have in hand, intended to hit important states in the mid-term elections.