The Director General of the National Lottery Authority, Hon Kofi Osei Ameyaw has sued JoyNews/Joy FM and the entire Multimedia Group limited over what they describe as unfair, untrue and biased investigative piece.

This comes the media company investigated an uncovered loss of over $10 million in the procurement of Point of Sale (POS) devices for the National Lottery Authority (NLA).

It suggested that the supply of these devices should have cost less than half of the contract sum of $25 million.

The NLA in a statement, however, dismissed these claims, insisting that they were not factual. 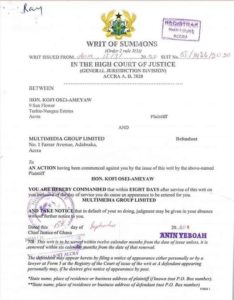 Akufo-Addo promises to rewire all markets in Accra