The Criminal Investigations Department (CID) of the Ghana Police has formally invited the National Chairman of the opposition National Democratic Congress (NDC), Mr Samuel Ofosu Ampofo to assist with investigations into the leaked tape in which he was said to be conspiring with party members to harm political opponents.

The letter inviting Mr Ampofo said he should report at the CID headquarters today, Thursday, February 28, 2019, at exactly 10 am.

The National Democratic Congress in a statement signed by the Communications Director, Sammy Gyamfi said the tape is false and concocted.

“The National Democratic Congress (NDC) has taken notice of an alleged leaked audio recording being circulated by officials and surrogates of Government and the New Patriotic Party, in which certain doctored remarks have been mischievously attributed to the National Chairman of the NDC.” – the party statement reads.

Mr Ofosu Ampofo has come under fire over comments he allegedly made in the secret recording. On the recording, a voice believed to Mr Ampofo’s is heard urging people to take the Chairperson of the Electoral Commission, Mrs Jean Adukwei Mensa to the ‘cleaners’.

The voice also endorsed verbal attacks on the National Peace Council Chairman, Most Rev. Prof. Emmanuel Asante. The audio tape also suggests that abductions and kidnappings could be used to silence political opponents.

A statement by the Police CID said Mr. Ofosu-Ampofo must report at the CID Headquarters in Accra on Thursday to help with investigations.

“The Criminal Investigation Department of the Ghana Police Service has intercepted an audio message circulating in both traditional and social media on Wednesday 27 February 2019, in which you are alleged to have made some comments that have some security implications,” the statement noted.

Read The Full Statement below: 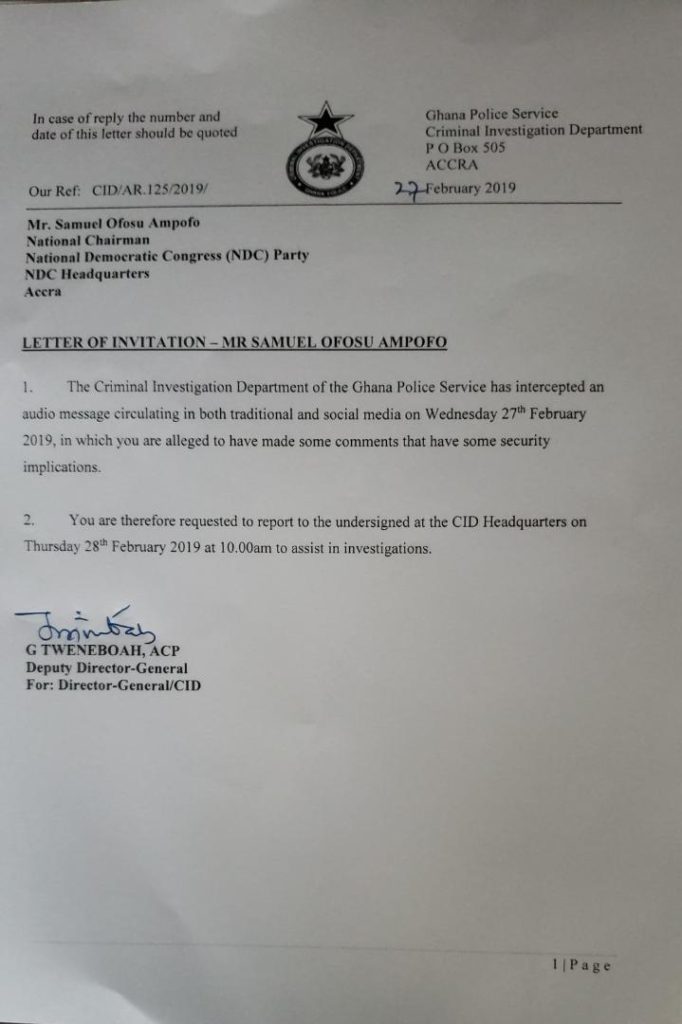 Distance yourselves from ‘shameful’ Ofosu Ampofo – NPP to NDC