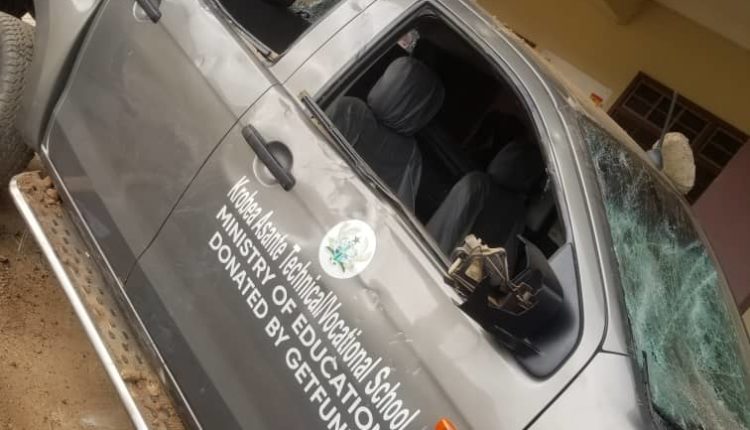 About 40 students of the Krobea Asante Technical and Vocational School in the Ashanti Region were arrested yesterday Sunday January 22, when the Regional Police Command stormed the school to protect Government properties which were being vandalized by wild rampaging rioting students who seemed to have gone berserk.

Before the arrest of the 40, the rioting students had already turned upside down a salon car owned by a teacher, smashed its screens and attempted to set it ablaze.

They had also attacked and vandalized four Government vehicles, including a Mahindra pick-up branded with Ghana’s Coat of Arms and the inscription “Krobea Asante Technical Institute, Asokore Ash”, an Isuzu pickup truck, a Nissan Patrol and one of the school’s official buses.

As if their senses had been taken over by some destructive demons the rampaging students also damaged a Toyota Vitz vehicle owned by the Senior House Mistress and then broke into the school’s food store where they looted and destroyed food items and supplies.

Not satisfied with the damage done, the students were said to have attempted to break into some of the staff bungalows but were not successful therefore decided to vandalize parts of the buildings.

The Ashanti Regional Security Council (REGSEC), after accessing the extent of damage done by the students and the security situation, ordered the immediate and indefinite closure of the school on Sunday.

Without giving any hint, the peeved-looking students, on Sunday morning, embarked on the unlawful demolition spree on campus as they destroyed properties.

They were said to be angry over their poor performance in an examination, which was supervised by the National Board for Professional & Technician Examinations (NABPTEX).

According to reports reaching THE NEW PUBLISHER, the rampaging students had a field’s day as they smashed the windscreen of several cars of their teachers.

The school authorities, who were overwhelmed by the students, then called for support from the police, who rushed there and arrested leaders of the riots.

“The Regional Security Council has taken assessment of the situation and per the briefing and advice the school environment wouldn’t be safe for teaching and learning and so the school has been shut down,” said a deputy spokesperson for the Ghana Education Service Opoku Mensah Yaw.

“For now investigations have started, there has been some arrest and since this is a security matter. The school is under TVET service and so that fold will have to work on a report and submit to the regional education directorate and that process has started,” Mr. Opoku Mensah added.

Security has since been beefed up to avert any planned attack.

Meanwhile, reports suggested that those arrested would definitely be punished severely after investigations to server as deterrent to other students in future.