Police have arrested a suspect in connection with the death of US rapper XXXTentacion.

The suspect, named as Dedrick D Williams, 22, is facing a charge of first-degree murder.

The 20-year-old rapper, real name Jahseh Onfroy, was shot as he left a motorcycle dealership in south Florida on Monday and died later in hospital.

Often described as one of rap’s most controversial artists, he quickly rose to fame with two hit albums.

He was facing domestic violence charges.

It is not clear whether police are looking for other suspects. 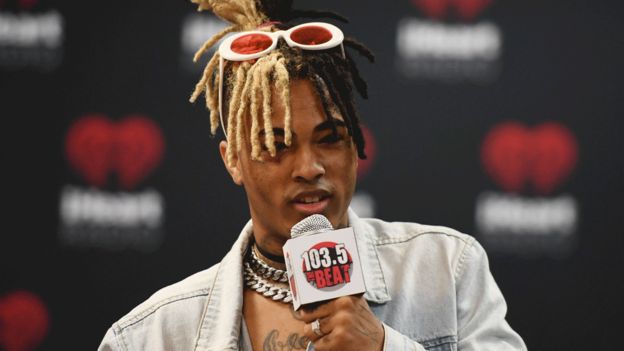 Police are guarding their home after a fan of the rapper posing as a pizza delivery man tried to visit them.

Gina Carter, the public information officer for Broward County Sheriff’s Office, tweeted that Mr Williams had been arrested at 19:00 local time (23:00 GMT) on Wednesday in the city of Pompano Beach.

More details of the arrest will be released later, she said.

Mr Williams has also been charged with a probation violation for theft of a motor vehicle and driving without a valid licence, the New York Daily News reports.

Onfroy was leaving the dealership shortly before 16:00 local time on Monday when two men approached him, officials say.

At least one of them shot him before both fled the scene in Deerfield Beach, 43 miles (69km) north of Miami, in a dark-coloured SUV.

Video posted on social media apparently showed Onfroy slumped in his car. A witness told celebrity news website TMZ that multiple shots had been fired outside the dealership.

The Broward County Sherriff’s Office had offered a $3,000 (£2,200) reward for any information about the killing.