The parents of a suspect in a shooting at a US synagogue at the weekend have condemned their son.

The family of 19-year-old John Earnest released a statement describing his alleged actions as “part of the history of evil” perpetrated on Jewish people.

One victim, Lori Kaye, 60, died in Saturday’s attack after throwing herself in front of the rabbi when a gunman opened fire.

A funeral will be held for Mrs Kaye on Monday. The suspect is in custody.

In the statement released on Monday by their lawyers, the Earnest family said they were “shocked and deeply saddened by the terrible attack”, which resulted in the injury of three others in addition to Mrs Kaye’s death at the Chabad of Poway synagogue near San Diego.

“Our sadness pales in comparison to the grief and anguish our son has caused for so many innocent people,” they wrote.

“He has killed and injured the faithful who were gathered in a sacred place on a sacred day.” 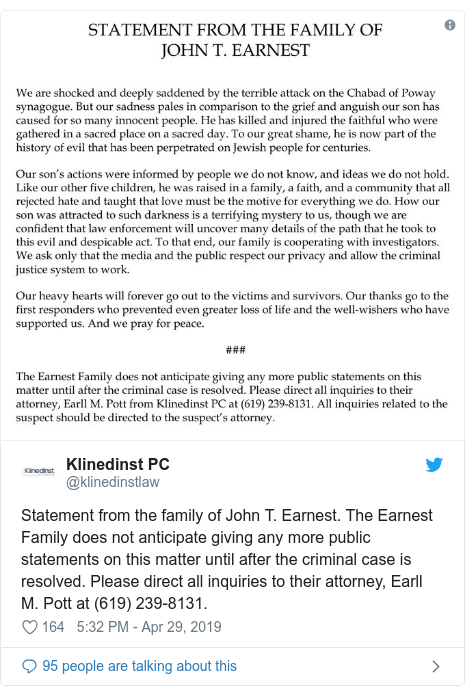 “Like our other five children, he was raised in family, a faith, and a community that all rejected hate and taught that love must be the motive for everything we do. How our son was attracted to such darkness is a terrifying mystery to us.”

Mr Earnest was arrested on Saturday in Poway, north of San Diego, shortly after the shooting.

In the statement, his family said they were co-operating with authorities in the investigation and would be unlikely to provide any further statement until the criminal case is resolved.

The FBI said on Monday that it was alerted of a threat just minutes before the shooting attack occurred.

The agency said in a statement that about five minutes before the gunman opened fire on Saturday, it received tips through its website and hotline about “an anonymous threatening post” on social media.

According to the FBI, the statement did not provide specific information about the author of the post, or the intended location of the attack.

“Although FBI employees immediately took action to determine the post’s author, the shooting occurred before the suspect could be fully identified,” the statement said. “The FBI thanks the alert citizens who saw and reported the post.”

Police have not yet suggested a motive for the attack.

Mrs Kaye had been attending Chabad of Poway on Saturday with her daughter and husband when the attack took place.

She was one of the synagogue’s founding members when it first opened its doors in 1986.

Rabbi Yisroel Goldstein was among those caught by the bullets, and lost his right index finger after he was shot in the hand.

“Everyone in the community knew her,” he told reporters. “I’m just so heartbroken and saddened by the senseless killing.”

A friend, Audrey Jacobs, was one of several people to pay their respects to Mrs Kaye on social media.

The suspected gunman is due in court on Wednesday.

The shooting came exactly six months after 11 people were killed during an attack at a Pittsburgh synagogue. That was the deadliest anti-Semitic attack in US history.