Teens ‘May Still Be Alive’ In Thai Cave

Thailand’s deputy PM has said he is optimistic a group of young footballers trapped inside a cave are still alive, as the search enters a third day.

The boys, aged between 11 and 16, and their coach entered the cave in Chiang Rai province on Saturday.

Navy divers sent into search resumed their efforts on Tuesday after rising waters halted the search.

They had reportedly seen fresh footprints inside the cave complex, raising hopes for the group’s safety.

“We are still optimistic they are all alive,” Deputy Prime Minister Prawit Wongsuwon said on Tuesday.

“Even though they may not have anything to eat, they should have water to drink.” The Tham Luang Nang Non cave is a tourist attraction which runs for many kilometres underground.

The boys and their 25-year-old coach are thought to be in a chamber of the extensive cave network.

Desperate relatives have been camping out at the cave, which lies near the border with Myanmar, holding a prayer ceremony for their safe return.

“My child, I’m here to get you now,” one crying parent said, according to AFP.

Navy divers have been trying to reach the deepest caverns, and turning the area around the caves into a sea of mud. Weary, rain-soaked rescuers can be seen coming to and from the cave entrance, where medical teams are waiting, in the hope that the missing boys may be found.

They have brought in pumps to try to reduce the water level, but so far have only been able to use them outside the caves, where their efforts are being thwarted by the rain. They are now reeling power cables into the caves to help the divers with better light, and to use the pumps there. They have also tried using drones.

So far the only sign of the missing boys is the bicycles they left, which are still locked to the fence at the cave entrance, and some handprints spotted by divers who reached one of the largest underground chambers on Monday.

How was the team trapped?

The team and their coach are believed to have entered the Tham Luang Nang Non cave on Saturday afternoon.

Rescue workers began searching for them on Saturday night after they were reported missing. The search was briefly halted but navy divers were able to re-enter the cave early Tuesday.

Large squads of soldiers have been brought in to see if they can get access from the hills above the caves.

There are also dozens of volunteers with more experience of cave diving and exploration. 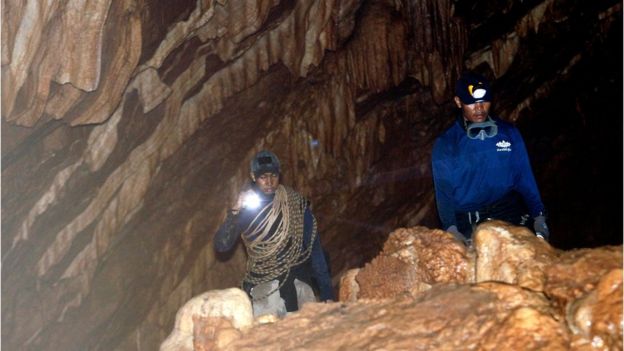 According to the Bangkok Post, visitors must cross a small stream to enter the cave, making it inaccessible if the stream floods.

The cave can flood up to 5m (16ft) during Thailand’s rainy season, which runs from June to October.

Rescue teams were preparing to train the team to use scuba gear, in case they had to dive out through areas of the cave which were completely submerged, according to local officials.