US President Donald Trump has promised a “forceful” response to the alleged chemical attack in Syria, as Western leaders consider what action to take.

“We have a lot of options militarily,” he told reporters. He added that a response would be decided “shortly”.

Mr Trump said the US was getting some “good clarity” on who was responsible for the incident in Douma on Saturday.

Medical sources say dozens were killed in the alleged attack but exact numbers are impossible to verify.

Mr Trump also discussed the incident with French President Emmanuel Macron late on Monday, and both leaders expressed a desire for a “firm response”, the Elysee Palace said.

The AFP news agency quoted French government spokesman Benjamin Griveaux as saying on Tuesday that “if a red line had been crossed, there will be a response”, adding that intelligence shared by the two leaders “in theory confirms the use of chemical weapons”.

The condemnation from Western leaders follows a tense meeting at the UN Security Council in which the US and Russia traded harsh words over the incident.

Russian representative Vassily Nebenzia said the alleged attack was staged and warned that US military action in response could have “grave repercussions”.

US envoy Nikki Haley said Russia – a Syrian military backer – had the “blood of Syrian children” on its hands and branded President Assad a “monster”.

Ms Haley has called for a vote on Tuesday on a draft resolution to set up a new inquiry into the use of chemical weapons in Syria.

But Russia says it cannot support the proposal because it contains “unacceptable elements”.

What happened on Saturday?

The Syrian-American Medical Society said more than 500 people were brought to medical centres in Douma, in the Eastern Ghouta region, near the capital Damascus, with symptoms “indicative of exposure to a chemical agent”.

Neither the death toll nor what exactly occurred can be verified as the area is blocked off with access denied.

The estimates of how many people died in the suspected chemical attack range from 42 to more than 60 people, but medical groups say numbers could rise as rescue workers gain access to basements where hundreds of families had sought refuge from bombing.

The French representative at the UN Security Council said poison gas had deliberately been used as it could seep down to the basements.

The US, France and UK have led international condemnation of the alleged attack, with the Syrian government and its Russian backers denying any responsibility. 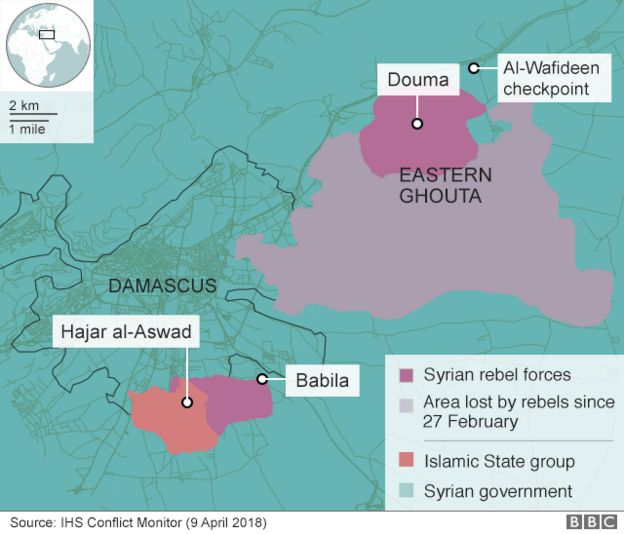 What did Russia say at the UN?

Mr Nebenzia, presenting Russia’s case that rebels in Douma staged the event for their own ends, painted the incident and its fallout as part of a US-led effort to hurt Russia with a “broad arsenal of methods”, including slander, insults and “hawkish rhetoric”.

In an angry statement, he invited investigators from the Organisation for the Prohibition of Chemical Weapons (OPCW) to fly to Syria as soon as Tuesday, saying that Russian troops would escort them to the site of the alleged attack.

Moscow has said its experts have not found “any trace of chlorine or any other chemical substance used against civilians”.

Mr Nebenzia said the tone taken against Russia had gone beyond what was acceptable even during the Cold War and warned against a US military response.

“Armed force under mendacious pretext against Syria, where, at the request of the legitimate government of a country, Russian troops have been deployed, could lead to grave repercussions,” he said.

What is the wider context?

Tensions between Russia and the West have plunged to their worst level in decades, following the poisoning in March of an ex-spy in England that the UK blamed on Moscow, and alleged Russian interference in the 2016 US election.

The poisoning of Sergei Skripal and his daughter Yulia with what the British government says was a military-grade Novichok nerve agent of a type developed by Russia led to the mass expulsion of Russian diplomats by Western allies, to which Moscow responded in kind.