US Embassy Opens In Jerusalem Amid Lockdown

The United States has officially relocated its embassy from Tel Aviv to Jerusalem, in a deeply controversial move that angered Palestinians and drew widespread regional condemnation.

The ceremony on Monday took place amid road closures and heavy police presence in anticipation of Palestinian protests, as well as deadly demonstrations in Gaza calling for the refugees’ right to return to the homes they were forcibly expelled from 70 years ago. 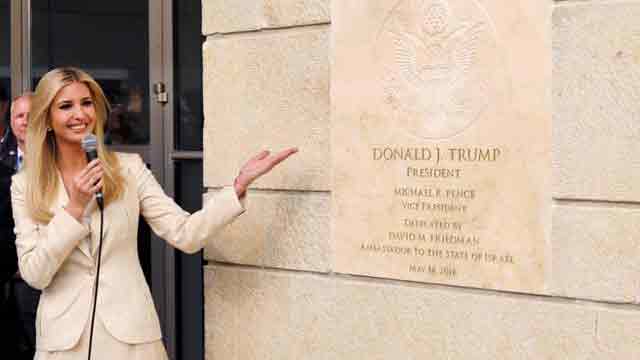 US President Donald Trump – who in December 2017 declared Jerusalem as Israel’s capital, a move long sought by Israel –  addressed the ceremony via a recorded video message.

“Today we follow through on this recognition and open our embassy in the historic and sacred land of Jerusalem, and we’re opening it many, many years ahead of schedule,” Trump said.

His comments came as at least 55 Palestinian demonstrators in Gaza were killed by Israeli forces along several points near the fence with Israel.

More than 2,400 others were also wounded as the Israeli army fired live ammunition, tear gas and firebombs at protesters assembled along several points near the fence with Israel.

Many were in critical condition, and there were fears the death toll could rise in what was the deadliest day for Palestinians killed by Israeli forces since the 2014 Gaza war.

But addressing the Jerusalem ceremony in person, Israeli Prime Minister Benjamin Netanyahu praised “our brave soldiers protecting the border … as we speak today” and said the embassy move marked a “glorious day”.

“Remember this moment, this is history,” Netanyahu said. 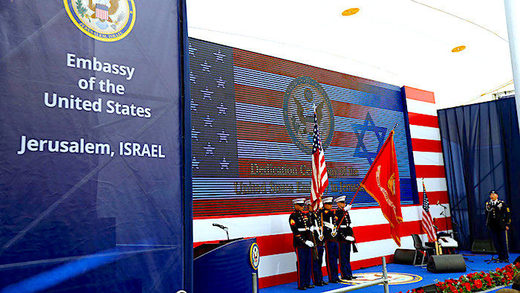 “We have no better friends in the world, you stand for Israel, and you stand for Jerusalem … President Trump, by recognising history, you have made history … We are in Jerusalem, and we are here to stay.”

The demonstrations in Gaza follow a weeks-long protest calling for the right of return for hundreds of thousands of Palestinian refugees to the areas they were forcibly expelled from in 1948.

Israeli forces have killed at least 90 Palestinians in the besieged coastal enclave and wounded an estimated 10,500 others since the protests began on March 30.

Israeli police said that up to 1,000 officers were posted around the embassy’s new location in the southwest neighbourhood of Arnona and its surrounding areas.

The closures spread to occupied East Jerusalem, where access to the Old City was curtailed in areas leading to it such as al-Tur, Mount of Olives, Sheikh Jarrah and Silwan.

At the Qalandiya checkpoint in the West Bank, Israeli soldiers fired tear gas and rubber bullets at Palestinian youth who were throwing stones.

A statement by Egypt’s Ministry of Foreign Affairs on Monday condemned Israel’s “use of force against peaceful marches” and warned of the “negative repercussion of such serious escalation in the Palestinian occupied territories.”

In a statement published on Sunday, Turkey’s President Recep Tayyip Erdogan accused the US of disregarding “rights and justice” by going through with the embassy move.

“History and humanity will never forgive the injustices done to our Palestinian brothers,” Erdogan said.

The Arab League – a 22-member body of which Palestine is a member – will hold an extraordinary meeting on Wednesday to discuss the US’ embassy move, the Middle East News Agency reported.