A new video has been released of the 12 boys and their football coach trapped in a Thai cave, in which they say they are in good health.

Smiling and at times laughing, they introduce themselves one by one.

They were found on Monday after nine days trapped deep in the cave by rising water and have since received food and medical treatment.

But their rescue may take months as they must either be taught to dive or wait for the water to recede.

The concern is that the rainy season has only just begun, so water levels in the Tham Luang cave will almost certainly continue to rise.

Lit by torches and with divers sitting alongside, they each give their name and the traditional “wai” greeting, putting their palms together.

Two other videos show the group having some light scratches treated by a military doctor. The boys are also again seen asking how soon food is coming. 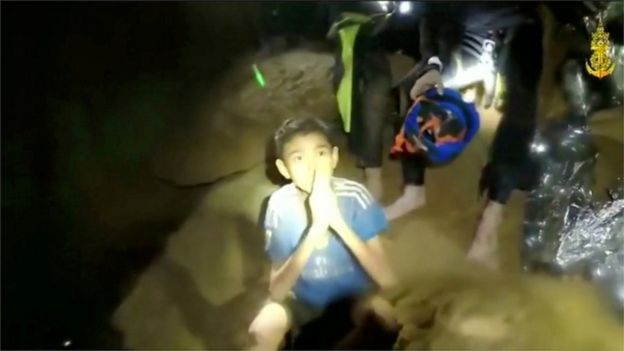 Written on a rock in the cave can be seen the name of the football team and of the Navy Unit involved in the rescue.

Two Navy SEAL divers will be staying with the group underground from now on.

Rescuers are trying to work out how best to bring them all to safety, with officials stressing they do not intend to take any risks with the boys’ safety.

Experts have cautioned that taking inexperienced divers through the dangerous corridors of muddy, zero-visibility waters would be very risky. None of the trapped boys can swim.

Some of the route involves squeezing through tight gaps underwater. In parts it is too narrow to wear an oxygen tank and the exits are not visible, so it would be easy for a child to panic.

Other teams are still scouring the mountainside in the hope of finding another way into – and out of – the cave.