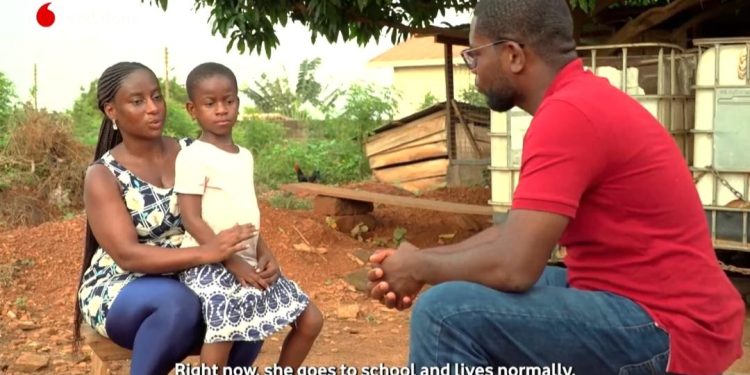 In the seventh episode of the Vodafone Healthline Spin-Off edition, the team went to Dawhenya to check on Ewurabena, a seven-year-old girl who had surgery three years ago with help from Vodafone because she had been having trouble eating since she was born.

Ewurabena, who was born with a throat blockage, was unable to eat or drink through her mouth and had to be fed through a tube implanted in her stomach.

Her mother, Jennifer Hagan, described to the team how she would not have been able to afford the surgery for many years. She said that, despite challenges two months after Ewurabena’s operation, she is now doing well, eating and drinking through her mouth, and living normally.

“Vodafone Healthline is for everyone,” Ewurabena’s mother said, thanking the team and telling anyone who needed help to contact the team.

During the episode, Drs Kwekuma Yalley and Aba Folson, together with host Frema Asiedu, examined the idea that massaging a baby’s head with hot water will give it a better shape.

Both doctors agreed that the practice does not change the baby’s head shape. Dr Yalley emphasized how sensitive a baby’s head is and credited heredity for determining its shape. He dispelled the misconception by clarifying that, while warm water is pleasant and calming, it does not affect the form of a baby’s skull. He expressed concern that hot water could cause burns.

In the seventh episode, the panel also talked about how insulin resistance, irregular periods, and other things can make women more likely to have polycystic ovary syndrome.

Dr Padi Aryetey, an obstetrician and gynaecologist, highlighted several frequent symptoms of the polycystic ovarian syndrome. According to him, the symptoms include irregular menstruation, chin hair, and other hormonal issues. However, he asserted that insulin resistance was the primary cause, explaining that high insulin levels cause the ovary to produce more male hormones, which in turn causes the polycystic ovarian syndrome.

Dr Aryetey talked about treatments for the syndrome and suggested ways to treat it with medicine.
Through the Vodafone Healthline show, Vodafone has provided free medical education and interventions to the public. The show keeps giving useful information through interesting content on social media and some other media outlets.