The Chief of Srogboe, Togbui Patamia the IV, has filed a suit at the Accra Human Rights High Court against the Attorney General and two others, following a decision by the Commission of Enquiry on the creation of new regions to hold public hearings for the creation of a new region in the northern part of the Volta Region.

The suit follows an initial letter sent to the Commission of Enquiry expressing reservations about the schedule of meetings in the region with regards to the proposed Oti region.

The chief is seeking the following reliefs in his suit:

A petition was earlier submitted to the Commission of Enquiry requesting that the hearings in the Volta Region be expanded beyond the northern part of the region to cover areas in the south as well.

The lawyer for the seven petitioners, Albert Quashigah, told Citi News that his clients had decided to petition the Commission because they felt that persons who lived in the southern part of the region were being discriminated against in the process.

According to them, the decision to select venues for the hearings which were predominantly based in the north, constitutes an exclusion of the people in the south, despite the fact that a regional split would affect the entire region.

“About five venues have been chosen. My clients became alarmed because if you look at the distribution of the venues for the hearing, you would find that they are basically concentrated in the northern part of the Volta Region,” he said.

“These public hearings are for the Volta Region. The region is a mass expansion of land from the south to the north, and the eventual creation of the region would affect the entire region. So if you want to do a public hearing on a matter as sensitive as this, you don’t create the impression that only those who live in the areas involved in the split will be considered.” 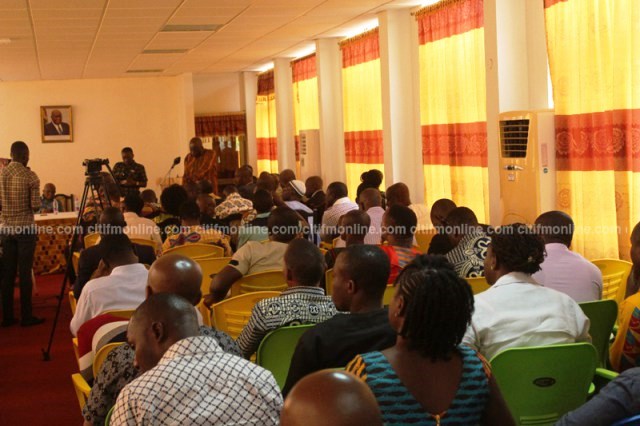 In their response to the concerns raised, the Commission said given the fact that the petition had been received for the creation of a new region from the northern part of the Volta Region, it was imperative that it visits the parts earmarked for the split to determine whether the action is viable.

In a  letter to the petitioners signed by its Secretary, Jacob Saah, the Commission said the venues chosen for the hearings were the “most appropriate” to ensure the ultimate success of its work in the region.

“The Commission is of the considered opinion that the venues for the public hearings, published in the Daily Graphic of January 8, 2018, are the most appropriate if the objectives of the mission to the Volta Region are to be achieved. The Commission’s visit has been necessitated by a petition from the Chiefs and people of the northern part of the Volta Region demanding the creation of a new region,” the letter said.

“The facts and issues raised in the petition can only be verified in that part of the country. The Commission therefore has a duty to visit the northern part of the Volta Region to observe things at first hand, and interact with its people directly. The Commission is aware that the Chiefs and people of other parts of the Volta Region also desire for their opinions to be heard on the matter at hand.”

President Nana Addo set up a Commission of Enquiry  in 2017 to collate the views of various stakeholders and residents on the creation of new regions.

The Commission, upon assumption of office toured the Volta, Western, Northern and the Brong Ahafo Regions, to solicit the views of residents on the creation of the new regions.

A retired Justice of the Supreme Court, Justice Brobbey, led the committee of 8 members to undertake the consultation process.

The Commission has also engaged chiefs and opinion leaders from the Western, Volta Northern and the Brong Ahafo Regions during its consultations.

Government is seeking to split the Northern, Western, Volta and the Brong-Ahafo Regions. However, some analysts, including chiefs have expressed their reservations about the move, arguing that it is merely for political advantage.

But the Minister of Regional Re-organisation, Dan Botwe, has dispelled such claims, saying the new regions would create economic opportunities for all.