Nearly 50 people have died in wildfires in the eastern part of the Attica region around Athens, in Greece’s worst fire crisis in more than a decade.

According to the local mayor, 26 bodies were found in a yard in the seaside village of Mati, which is at the centre of the disaster.

The fire brigade confirmed an overall death toll of 49, with many of the dead believed to be young children.

Many calls have been made to the rescue services looking for missing persons.

As part of a huge rescue effort, emergency workers used boats and helicopters to evacuate a beach.

Hundreds of firefighters have been battling the blazes and the authorities are seeking international assistance.

“We will do whatever is humanly possible to control it,” Prime Minister Alexis Tsipras told reporters.

The most shocking scene I ever witnessed

I could see some of them lying on the ground as fog covered the place and a toxic smell spread through the atmosphere.

Most of them were tourists who had tried to find refuge but did not make it.

“I am calling my cousin but he does not respond,” said Spiros Hatziandreou, who visited the spot. I could see flames on the trees and the electricity pillars all around. After that, police blocked access to everyone except rescuers.

How badly burnt is Mati?

Fire swept through the village 40km (25 miles) north-east of Athens on Monday and was still burning in some areas on Tuesday morning.

Desperate families trying to reach the safety of the sea, just metres away, were trapped by walls of smoke and flame. Others died in buildings or cars.

Coastal patrol boats and private vessels picked up hundreds of those who did manage to reach harbours or beaches.

“Thankfully the sea was there and we went into the sea, because the flames were chasing us all the way to the water,” said one survivor, Kostas Laganos.

“It burned our backs and we dived into the water… I said, ‘My God, we must run to save ourselves.'” 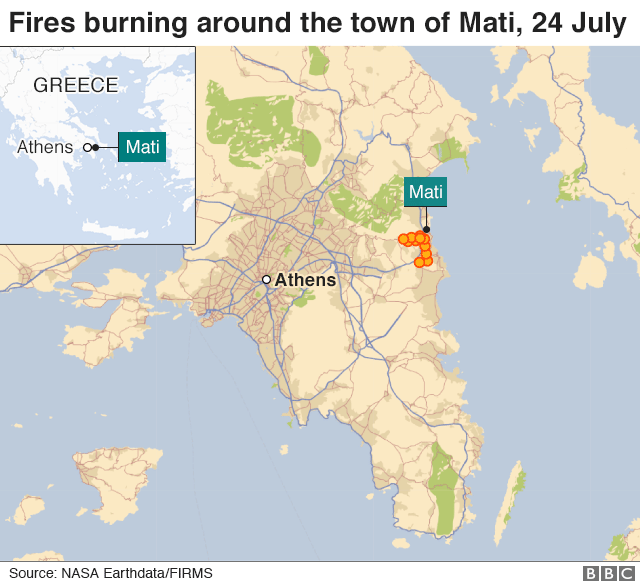 The village is located in the Rafina region which is popular with local tourists, especially pensioners and children attending holiday camps, Reuters news agency notes.

At least 150 people were injured in the area.

How are the authorities responding?

Prime Minister Tsipras has declared a state of emergency in Attica, saying all emergency services had been mobilised. 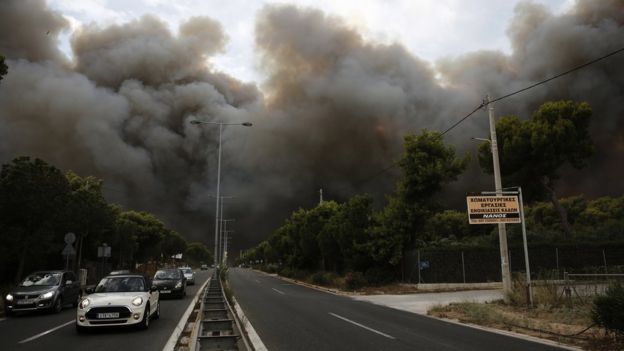 His government has asked other European countries for helicopters and additional firefighters to help tackle the fires.

Italy, Germany, Poland and France have all sent help in the form of planes, vehicles and firefighters, and Spain and Cyprus have offered Greece assistance, but with temperatures set to soar again, they are in a race against time to get the fires under control.

Help is also needed in Sweden where at least one person has been killed and dozens injured by forest fires there as soaring temperatures continue across much of Europe.

What caused the fires?

Fires are a recurring problem during the hot, dry summer months in Attica. The flames this week were fanned by high winds.

Officials quoted by AFP news agency have suggested the current blazes may have been started by arsonists looking to loot abandoned homes.

Greece, he added, had requested drones from the US to “observe and detect any suspicious activity”.

My Open Letter to Kennedy Agyapong