Robert Asare Bediako, the main contender in the Ashanti Regional Chairmanship race for the New Patriotic Party (NPP) has failed to show up at the maiden debate for aspirants ahead of the party’s election for regional executives.

Mr Bediako is contesting the incumbent Ashanti Regional Chairman of the party, Antwi Boasiako popularly called Chairman, in the upcoming regional elections on 21st April 2018 in the Ejura/ Sekyedumase Municipality.

Ahead of the elections, the Association of NPP chairmen from all 47 constituencies organized a debate dubbed “Time with the Chairmen” to give aspirants contesting for various positions a platform to speak to delegates and also give reasons why they are vying for those positions.

90% of the aspirants for all the positions took their turns to answer questions from the panel comprising the chairmen from the constituencies in the region.

The aspirants also used the platform to share their messages with delegates who were present at the forum ahead of the elections. 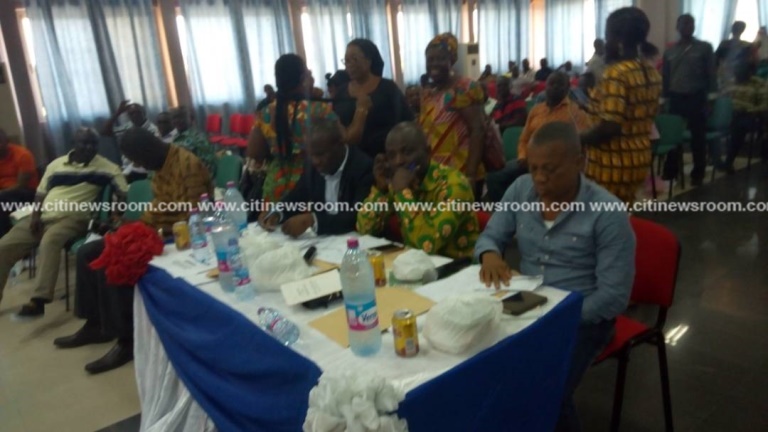 It was however unclear why the main contender for the incumbent regional chairman failed to appear at the forum as expected.

There has been reports of Mr. Bediako stepping down to allow Mr. Boasiako to go unopposed.

According to reports, Mr. Bediako has come under intense pressure by some key figures within the NPP to step down and allow the incumbent to go unopposed following his contribution during the 2016 general election that saw the NPP emerged victorious.

Some persons within Mr. Bediako’s camp are pushing hard to ensure he stays in the contest.

His failure to attend the two-day forum has raised more questions about his readiness and willingness to continue in the contest.

Mr. Boasiako was the only aspirant who turned up to answer questions from the panel when the contenders for the chairmanship position were called to the podium.

The podium, which had the name of Mr Bediako pasted on it was empty until the programme was brought to a close.

The incumbent chairman said the upcoming elections will be a done deal for him since he has proven beyond doubt his capabilities, and was ready to lead the NPP to victory in the 2020 and 2024 general elections.

He maintained that, he was the right person to lead the NPP in the Ashanti region and called on the party supporters to give him the needed support to enable him continue working for the party’s interest.

Mr Boasiako described his contender as a “late candidate” since he has been laid back from the onset.

Speaking to Citi News, Secretary to the organizing committee of the debate, Aikins Addae Poku, said Mr Bediako has not written to the committee to state the reason for his absence though he was expected to be part of the debate.

He said organizers of the debate had written to all aspirants after they had gone through the vetting process. Mr Addae Poku indicated that the organizers had no option than to allow the candidate who was present at the time to use the platform.

The Bosomtwi Constituency Chairman added that the forum will put persons aspiring for positions within the NPP to task and ensure they bring better ideas that will help the party in the long run.

Physician Assistants to Strike Over Arrest of ‘Innocent’ Colleague