7 Killed At Anti-Kabila Protest In Congo

Security forces in the Democratic Republic of Congo have killed at least seven people at a protest calling for President Joseph Kabila to step down, UN peacekepers say.

Police said three people had died and two of the deaths were being investigated.

Church activists and opposition parties had backed the demonstration.

Under a deal reached a year ago, Mr Kabila was due to step down by the end of 2017.

That was a year after the end of his second term in office. An election to replace him has now been delayed until December 2018.

Catholic activists had called for protests after Sunday church services, but the Congolese authorities banned the demonstration.

Police used live ammunition and tear gas to prevent protesters from gathering at locations including churches.

UN spokeswoman Florence Marchal said that in addition to the seven people shot dead in Kinshasa, another protester had been killed in the central city of Kananga,

More than 120 people had been arrested, she said.

She condemned the “use of force against peaceful demonstrators” and the “violent suppression of fundamental rights and freedoms by security forces”. 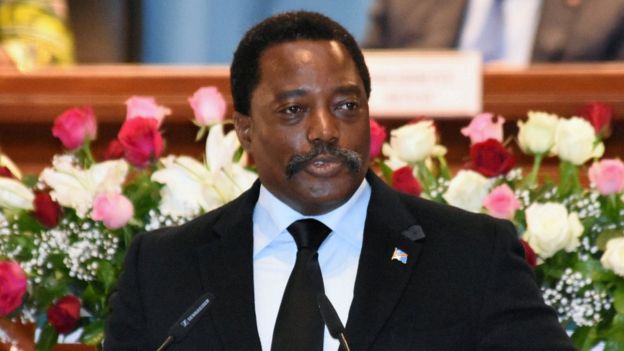 Mr Kabila has been in power since 2001. He was supposed to step down after his second and final term came to an end in 2016 but the vote to replace him was not held.

The failure to organise the polls led to a wave of deadly demonstrations by opposition supporters. The UN says dozens of people have been killed during anti-government protests over the past year.

A deal to create a transitional government brokered by the Catholic church collapsed because the government and the opposition were unable to agree on the power-sharing mechanism.