Algeria’s veteran President Abdelaziz Bouteflika has defied protesters by confirming he will run again – but says he will not serve a full term.

In a letter he said if he won April’s vote he would oversee a national dialogue leading to fresh elections that he would not contest.

His decision to seek a fifth term in office sparked nationwide protests.

Mr Bouteflika, 82, has rarely been seen in public since suffering a stroke in 2013.

Sunday saw new protests as a midnight deadline loomed for candidates to register. By nightfall young people were again marching in the capital Algiers despite the president’s offer.

Mr Bouteflika’s campaign manager submitted papers on behalf of the ailing president, who is undergoing medical treatment in Switzerland.

The electoral commission has said candidates need to submit them in person, but the Constitutional Council ruled that he did not have to be physically present.

How does the president’s idea work?

The proposal came in the form of a letter to the Algerian people read out on state television.

Should he be re-elected. Mr Bouteflika said he would hold an “inclusive national conference” followed by a vote to determine the next president.

He said he would not run again and acknowledged the protests that have rocked Algeria.

“I listened and heard the heartfelt cry of protesters and in particular of the thousands of youth who asked me about the future of our country,” the letter said, read by a presenter on ENTV.

“These youth express an understandable concern about the uncertainties they face. I have the duty and will to appease the hearts and spirits of my compatriots.”

Who else is running?

So far, six other candidates have formally registered, among them a retired general, Ali Ghediri, who has promised to bring “change” to Algeria.

Businessman Rachid Nekkaz, who has a sizeable Facebook following and is said to be popular among Algeria’s young, announced plans to run, but was deemed ineligible.

Instead his cousin, a car mechanic who is also called Rachid Nekkaz has entered and the businessman says he will serve as his campaign manager.

Two opposition parties, the Labour Party, and the Islamist Movement of Society for Peace, have said they will boycott the election.

A key challenger in previous elections, Ali Benflis, also is not running.

Are these protests unusual?

Yes – public shows of dissent in Algeria are rare, and the protests have been the biggest since Mr Bouteflika came to power 20 years ago.

Demonstrations broke out about 10 days ago after Mr Bouteflika announced his plans to run for office again. 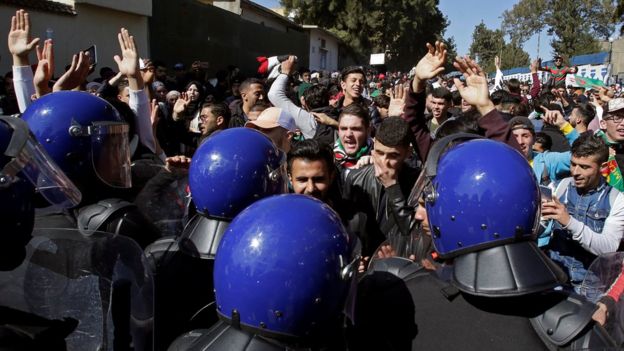 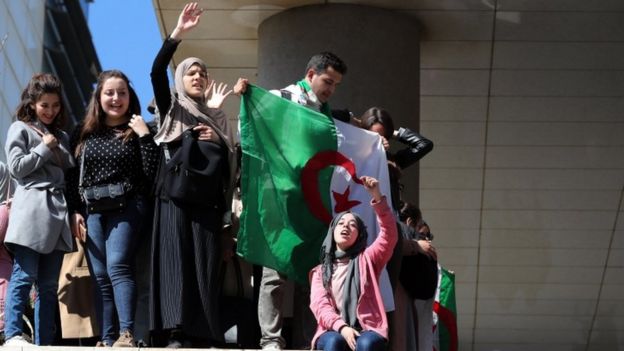 On Sunday, people again took to the streets of the capital Algiers and other major cities.

There have also been demonstrations in France, the former colonial power, which is home to a large Algerian community.

“We aren’t opposed to the president, but he is unconscious, he doesn’t exist anymore, his generals and those close to him are doing what they will behind his back,” one demonstrator told the AFP news agency.

Who is Abdelaziz Bouteflika?

Mr Bouteflika came to power in 1999 and is credited with putting an end to a civil war that is estimated to have killed more than 100,000 people.

Protests against food prices and unemployment broke out in 2011 during the Arab Spring but he responded by lifting a nearly two-decades old state of emergency, meeting a key demand of protesters.

After his stroke he won re-election in a poll denounced by the opposition and dissolved the country’s powerful spy agency, replacing it with a body loyal to him.

Critics say his ill health means that he is unable to perform his duties as president.

Despite the dissent, Mr Bouteflika is still widely tipped to win the election this year.

Algeria’s opposition is divided and Mr Bouteflika won the last presidential elections in 2014 despite doing no personal campaigning.