At least 23 people have been killed as tornadoes struck Lee County in eastern Alabama, authorities say.

County Sheriff Jay Jones said there had been “catastrophic” damage and that were fears more bodies would be found. The number of injured is not yet known.

Rescue efforts have been halted until dawn due to the danger of searching in the dark.

The most devastating tornado struck the area around Beauregard, carving a path at least half a mile (0.8km) wide.

It warned people to “stay out of damaged areas so first responders could do their job”.

Where have the tornadoes struck?

The area around Beauregard, about 60 miles (95km) east of Alabama’s state capital, Montgomery, appears to have borne the brunt. 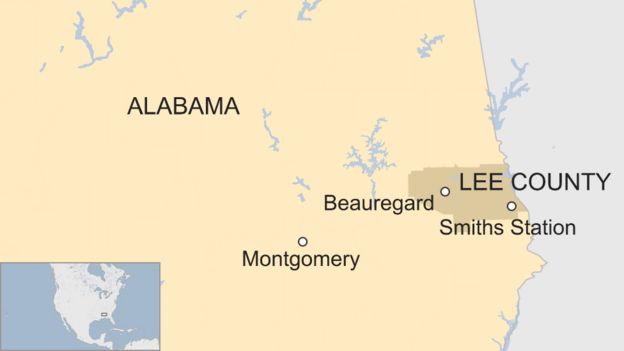 Sheriff Jones said some homes had been reduced to slabs.

Authorities fear the death toll could rise there.

Residents of Smiths Station told local TV they had seen businesses destroyed there. A large bar called the Buck Wild Saloon had had its roof torn off.

Sheriff Jones said: “The challenge is the sheer volume of the debris where all the homes were located. It’s the most I’ve seen that I can recall.”

Tornadoes were also reported in Walton County and Cairo in northern Florida.

What are the casualties?

All of the deaths so far have been in Lee County. Authorities say they are still working to identify the victims and the injured.

One of the dead in Beauregard was an eight year old, family members said.

“We’ve never had a mass fatality situation, that I can remember, like this in my lifetime,” Lee County coroner Bill Harris said.

He said on Sunday evening: “We’ve still got people being pulled out of rubble. We’re going to be here all night.”

Alabama meteorologist Eric Snitil tweeted that there were more deaths in Lee County in one day due to a tornado than in the entirety of the US in 2018.

East Alabama Medical Centre said it was treating more than 40 people injured by the extreme weather, and was expecting more.

Several people were reported hurt in Talbotton in Georgia, though not seriously.

What was the damage?

PowerOutage.US says there are about 3,000 customers without power across Alabama, with about 2,000 of those in Lee County.

Cold weather is forecast for the region after the tornadoes, with temperatures predicted to drop to near freezing.

The extreme weather initially cut off electricity for 21,000 Georgia Power customers, according to a company spokeswoman, and tore down trees and destroyed homes.

The National Weather Service said it would send three survey teams to assess the damage caused by tornadoes across Alabama on Monday.

What’s been the reaction?

Alabama Governor Kay Ivey posted on Twitter to warn residents there could be more extreme weather to come.

“Our hearts go out to those who lost their lives in the storms that hit Lee County today,” she wrote.

And Apple CEO Tim Cook, who was born in Mobile in the southwest of the state, said he was “devastated” by the news, saying Lee County was “a place close to my heart”.