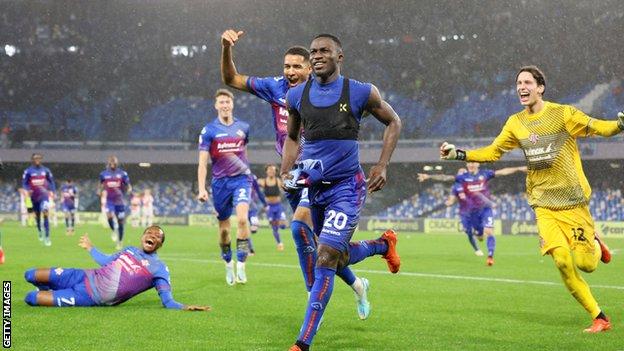 Ghana International, Felix-Afena Gyan was the star of the night as Cremonese eliminated Serie A leaders, Napoli from the Coppa Italia on Tuesday evening.

The 19-year old came on as a substitute in the 65th minute and scored a late equaliser to force the game into extra-time and eventually a penalty shootout, where he converted the winning penalty.

Cremonese took the lead through Charles Pickel, but goals from Juan Jesus and Giovanni Simeone turned the game around, before Afena-Gyan netted late to level the game.

Cremonese’s Leonardo Sernicola was sent off in extra time, but the visitors prevailed 5-4 in the shootout.

Stanislav Lobotka missed Napoli’s fourth spot-kick, while Cremonese scored all five of theirs to stun the 2019-20 winners.

Afena-Gyan has scored two goals in 11 appearances for the Italian side since joining on a permanent deal from AS Roma in August of last year.

Invest in Ghana despite current economic challenges – GIPC to investors