Akufo-Addo calls for prayers for Ghana 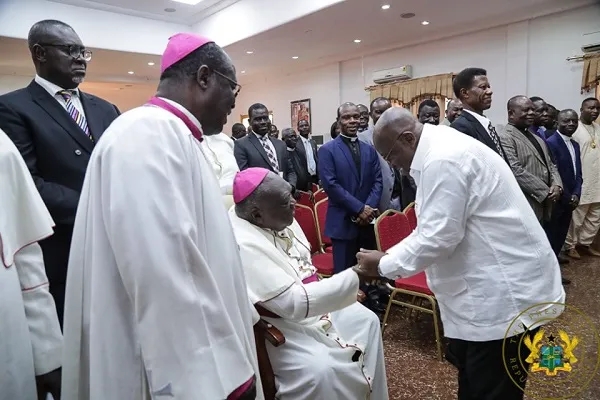 President Nana Akufo-Addo has called on Anglican Church leaders and the entire Christian leadership in Ghana to make it a point to bear the country up in prayer continually as the government works tirelessly to get the nation out of its current economic setback.

He made the call when he addressed the clergy and attendees of the second annual presidential New Year church service held at the banquet hall of the Jubilee House on Tuesday 10 January 2023.

“Even though we are presently confronted with difficulties in our economic performance, I do not doubt our collective resolve as I said on 6 January, to work our way out of these challenges and put our nation back onto the path progress and prosperity,” Akufo-Addo said.

“Let me plead strongly with the Church to bear the nation and me, continually up in prayers. As God’s children, we may be tempted to allow struggles to define our worth, however, our ultimate victory is guaranteed. We may stumble along the way, but we will always as Roman chapter 8 says, “be more than conquers,” he added.

President Akufo-Addo in his address announced that the International Anglican Consultative Conference will take place in Accra this year and the Archbishop of Canterbury, the senior bishop, principal leader of the Church of England, and the ceremonial head of the worldwide Anglican Communion, Justin Welby, will be attending.

He assured the leadership of the Anglican Church that he will attend the opening ceremony of the conference as well as grant the Archbishop of Canterbury, Justin Welby, audience at his office at the Jubilee House.

Most Rev. Dr. Cyril Kobina Ben-Smith, Primate and Metropolitan Archbishop, Church of the Province of West Africa and Archbishop, Internal Province of Ghana, led the congregation at the service.

He assured the gathering and the nation at large that even though the country is facing obvious economic challenges, the faithfulness of God towards the country Ghana, remains unchanged and unwavering.

“Like you and other world leaders, king David faced similar challenges, the murmuring of the people and the lamentations from the crowds, the abuse and the lack of understanding of the issues that are clear to all, yet David stood resolute in his conviction in the midst of opposition and he says in Psalm 46 God is my refuge and strength, an ever-present help in times of trouble” Most Rev. Dr. Cyril Kobina Ben-Smith said.

To this end, Most Rev. Dr. Cyril Kobina Ben-Smith, urged the President not to grow weary but remain steadfast in his resolve to rebound the economy and develop the country.