Ghana’s U-20 World Cup-winning squad: 10 years on, where are they now?

Ghana’s Black Satellites were hailed as heroes in 2009 after winning the Under 20 World Cup tournament, and becoming the first (and only) African nation to win the World Youth championship.

A number of the players from that side have gone on to make names from themselves while some have fallen off the radar.

Citi Sports catches up with the players from that golden squad and takes a look at their career paths since that famous night in Egypt 10 years ago.

Starting XI for the final

Daniel Agyei was undoubtedly the hero for the Black Satellites in the final.

He saved two penalties from Souza and Alex Teixeira as the side came from behind to win the shootout.

His great performance in the final and throughout the tournament earned him his first Black Stars call-up later that year and he eventually made his international debut against Angola in November 2009. He went on to earn five caps. 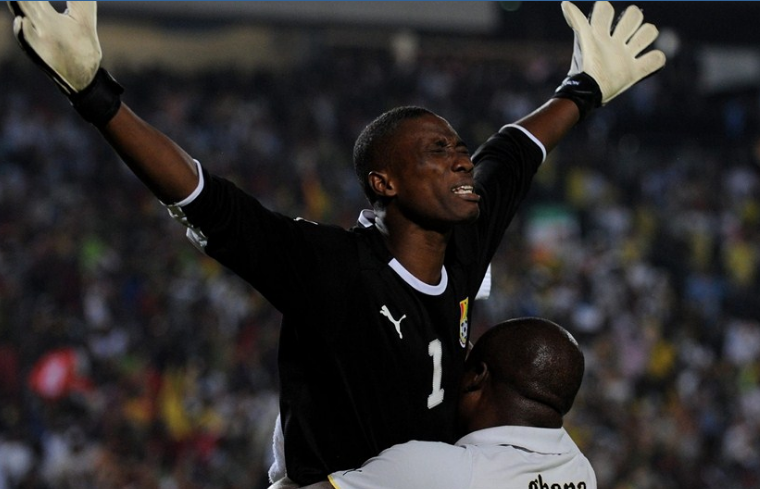 At club level, Adjei remained with Liberty Professionals for four more years before moving to South African club Free State Stars. After failing to nail down a place, he moved back to Liberty before stints at Medeama and Simba.

In 2018, he helped Ethiopian side, Jimma Aba Jiffar FC win the national championship.

At right-back, Samuel Inkoom was a beast for the Black Sattelites at the tournament. Defenders could not cope with his direct runs down the flank and forwards struggled to get past him.

The exploits of the then Asante Kotoko defender earned him a move to Swiss club Basel where he won the local double.

He then moved to Dnipro in Ukraine in 2011, and after loan stints with Bastia in France and Greek side Platanias signed for D.C. United in the MLS.

Over a two-year period, Inkoom also signed for Boavista, Antalyaspor and Vereya but his career took a nosedive when he was handed a ban from all football-related activities by FIFA after a pay dispute with his agent.

Inkoom enjoyed a long run as the Black Stars first-choice right-back, making 46 appearances. He was also part of the side that finished runners-up at the African Cup of Nations to Egypt in 2010.

Inkoom is currently on the books of Bulgarian side Dunav Ruse.

The lanky defender formed a good partnership with Daniel Addo at the tournament.

He remained at Free State Stars for a year after the tournament but secured his big move to Serie A club Udinese.

He was, however, loaned to Granada and moved to Evian in France without making a single appearance for the Italian side.  He moved to Russian club Anzhi Makhachkala in 2016 before heading to Columbus Crew in the MLS where he has played 77 times so far.

For the Black Stars, Mensah has become one of the side’s first-choice center-backs. He has represented Ghana at two World Cups and five AFCONs.

Daniel Addo moved to AshGold from King Faisal in 2010. A year later, he moved to FC Zorya. After spending two years in Ukraine he signed for Kairat, on loan in Kazhakstan.  He, however, returned to Ashgold in 2016.

He spent time at Gençlik Gücü, Gokulam Kerala and is currently at BSS Sporting Club in India.

David Addy signed for Portuguese giants Porto a year after the World Cup triumph. He was sent on loan to Académica de Coimbra and then Panetolikos.

He has also played for Vitória de Guimarães, Waasland-Beveren, Delhi Dynamos,  Rovaniemen Palloseura, Riga and is currently with Ilves in Finland.

Then at French club Nice, Quansah joined Arsenal Kyiv in 2011 before moving to Egyptian side El Gouna in 2014.

After a year at DC Motema Pembe in DR Congo, Quansah signed for Berekum Chelsea earlier this year.

Scoring a world cup-winning penalty has its perks.

Emmanuel Agyemang Badu was a mainstay in the Black Stars midfield for close to a decade, playing 78 times and was a key player for Udinese in that time as well, following the U-20 World Cup.

The captain of the World Cup-winning side, Andre Dede Ayew has seen his stock rise exponentially since the tournament.  He became a key player for French club Marseille where he spent eight years of his career.

Ayew then earned a big-money move to English club Swansea City in 2015 where he spent a year before moving to West Ham for a club-record fee. 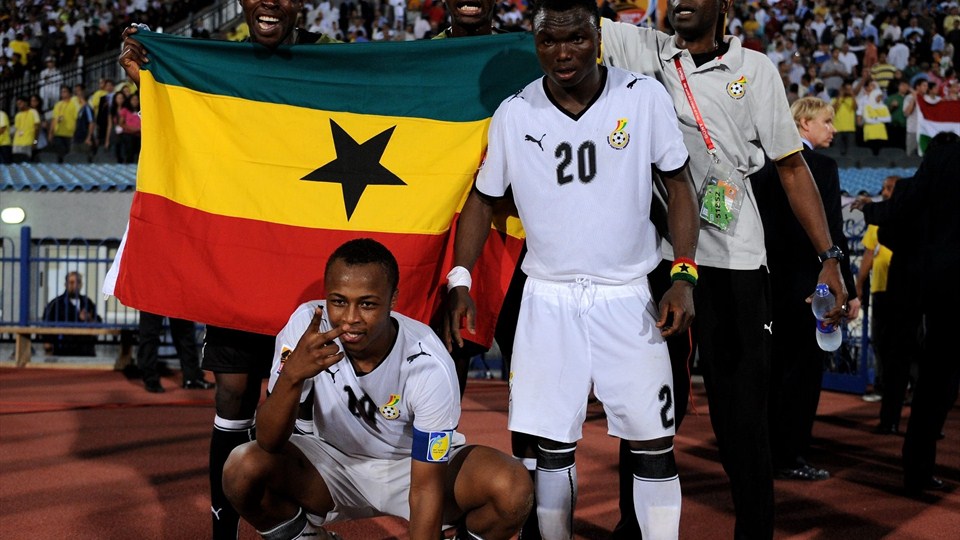 After three years at the Hammers, Ayew returned to Swansea but signed for Turkish club Fenerbache on loan after the Welsh side was relegated to the Championship. Returning to the Swans after his loan spell, Ayew has enjoyed a brilliant start to the season as he hopes to guide the side back to the Premier League.

Ayew has made 84 appearances for the senior national team and recently replaced Asamoah Gyan as the captain of the side.

Rabiu signed for Évian Thonon Gaillard from Liberty in 2011 after a successful loan. In 2013, Rabiu moved to Kuban Krasnodar before signing for FC Anzhi Makhachkala three years later.

Anzhi re-signed him in 2018 before he moved to Krylia Sovetov this year. He left the club “due to health problems” and signed for  France 2nd Division side Paris FC in August.

He has 31 caps for the Black Stars.

Ransford Osei’s four goals at the World Cup sparked interest from Dutch side FC Twente who signed him on loan from Maccabi Haifa. He then spent some time on loan at Granada.  Osei then signed for South African club Bloemfontein Celtic in 2012.

In 2012, he returned to Ghana and signed for Asante Kotoko before joining Polokwane City three years later. He was released by the South African side and signed for RoPS in Finland the following year. Since playing three games for FK Palanga in 2018, Ransford Osei has been without a club.

Possibly the biggest success story from the World Cup and the biggest disappointment after, Adiyiah was set for big things after being adjudged the top scorer and best player at the tournament.

Adiyiah signed for AC Milan in 2010 but failed to make a single appearance for them, spending time on loan at Reggina,  Partizan,  Karşıyaka and Arsenal Kyiv before moving permanently to Ukraine in 2012. 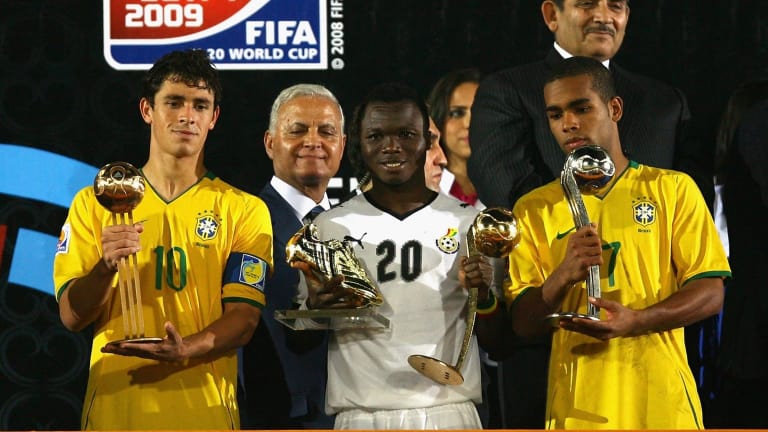 After a year there, he played for Atyrau and Nakhon Ratchasima, where he spent three years from 2015 to 2018. He currently plays for Sisaket in Thailand. 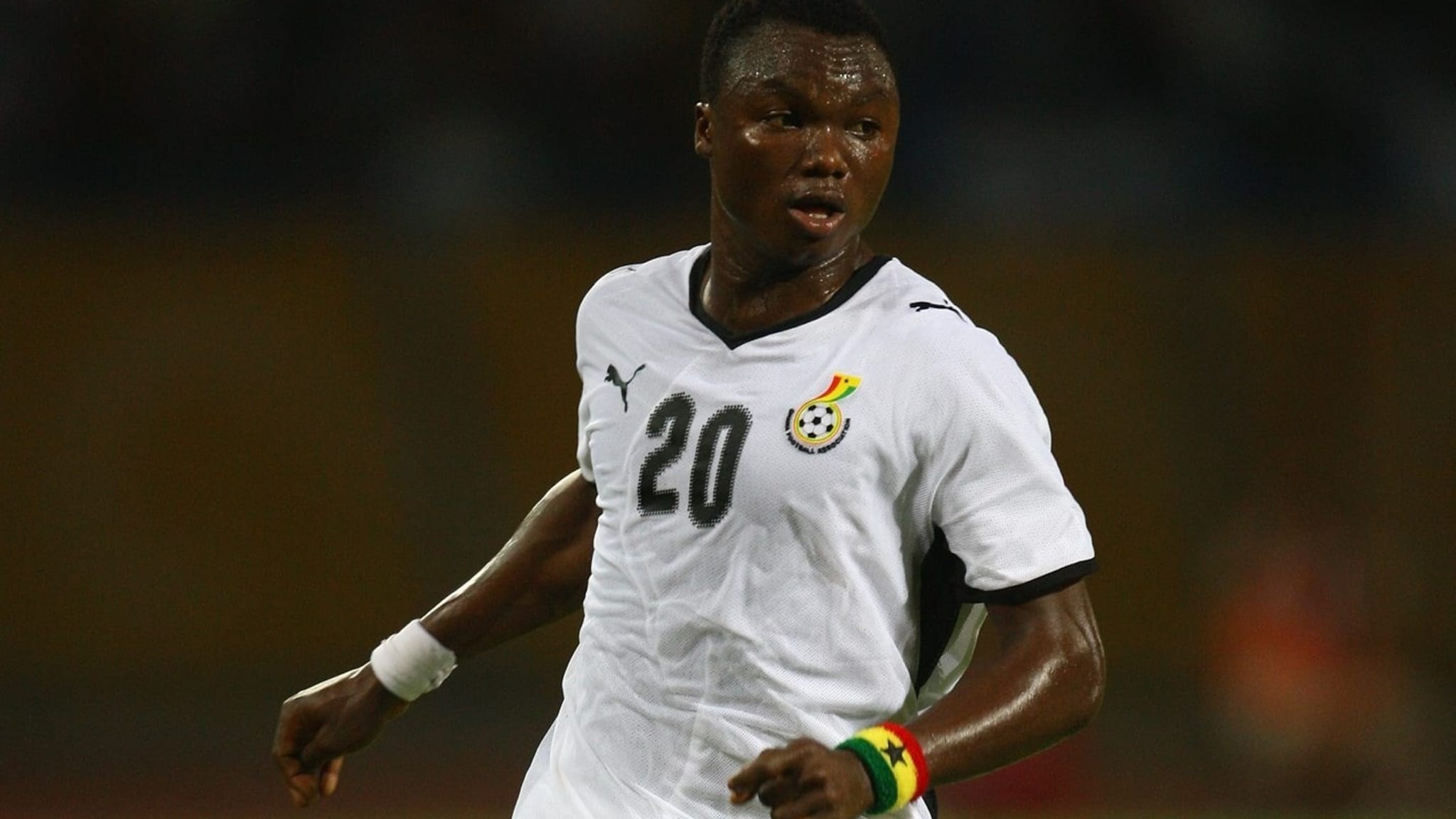 He made 20 appearances for the Black Stars including the unfortunate evening against Uruguay in the quarter-final at the 2010 World Cup where his goalbound header was blocked by Suarez’s hand before he missed in the penalty shootout.

Rest of the squad

Opare was already at Real Madrid Castilla during the tournament so it was expected that he would naturally move on to bigger and better things.

In 2010 he signed for Standard Liege where he spent four years before being snapped up by Porto. Since then, he has played for Augsburg and Lens and is currently at Belgian side Royal Antwerp. He has featured 20 times for the Black Stars.

In 2010 Awako signed for Spanish side Recreativo de Huelva from Hearts of Lions but moved permanently to Berekum Chelsea a year later.

He then signed for Congolese side TP Mazembe in 2012, spending five years there. Awako spent two years at Phoenix Rising in the MLS but is currently without a club.

The speedy winger remained at Al Sadd after the tournament before signing a permanent deal with Levski Sofia in 2012.

He played 10 times for the senior national team. The 30-year-old has since retired from professional football after a promising career was blighted by injuries which resulted in him missing out on a place in Ghana’s squad for the 2010 world cup.

Latifu Salifu made a name for himself at Liberty Professionals before moving to Berekum Chelsea in 2012.

He moved to AS Tanda in the Ivory Coast three years later but returned to Ghana with Medeama in 2017. Salifu then rejoined Berekum Chelsea last year.

Ghandi moved to Sheriff Tiraspol from Liberty Professionals in 2011 before signing for Degerfors IF after a year.

He returned to Liberty having spent only five months in Sweden. He has since played for Al Merreikh and Hearts of Oak.

Addae joined Serie B side Juve Stabia earlier this summer. He has made one appearance for the Black Stars.

Boampong moved to Hearts of Oak from Berekum Arsenal in 2010 before joining Saudi Arabian side Al-Shoalah after two years. He resigned with Hearts in 2013 before moving to Sekondi Hasaacas in 2016

Goalkeeper, Dabuo played for Wa All Stars for six years from 2007 to 2013 before signing for AshGold.

The centre-back signed for Qatari club Al Ahli from the aspire Academy in 2009.

Goalkeeper, Joseph Addo moved from Sekondi Hasaacas to Hearts of Lions in 2011 before switching to Asante Kotoko two years later. He then signed for Aduana in 2016.