Italy And NGO In Row Over Migrant Deaths

A bitter row has flared up between a Spanish rescue charity and the Italian government after a dead migrant woman and child were found off Libya.

Proactiva Open Arms posted images of the bodies and its rescue of a surviving Cameroonian woman clinging to timber on their deflated dinghy.

The charity said the Libyan coastguard had abandoned the three, and blamed Italy for backing it.

Italy and the Libyan coastguard deny the charity’s allegations.

Warning: some readers may find an image below disturbing.

The coastguard said it had rescued 165 migrants on Monday from a damaged boat in the area where the dinghy was found, nearly 80 nautical miles (148km) off the coast.

It said the migrants were dehydrated after drifting for more than 60 hours, and one dead baby girl was also recovered.

The coastguard did not say why the three others had been left on a damaged raft. 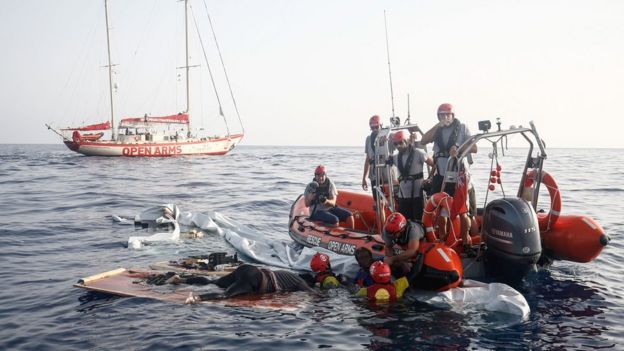 According to Proactiva Open Arms, the three were “abandoned by the so-called Libyan coastguards, who are legitimised and put in charge by Italy”. The charity added that “each death is a direct consequence of that policy”.

The NGOs accuse the Libyan coastguard of treating migrants harshly, and have condemned the practice of keeping them in unhygienic, overcrowded holding centres rife with human rights abuses.

Italy’s Interior Minister Matteo Salvini is campaigning to stop charity ships operating off the Libyan coast, where they have been rescuing migrants from unseaworthy boats.

He says such rescues should be handled by the Libyan coastguard, and accuses the charities of encouraging ruthless people-smuggling gangs.

Since 2014 more than 600,000 irregular migrants, most of them Africans, have reached Italy’s shores.

So far this year, 50,872 have crossed the Mediterranean to Europe – less than half the figure for the same period of 2017, the International Organization for Migration says.

The drop in numbers reaching Italy is attributed mainly to its close co-operation with the Libyan coastguard.

In another tweet, Mr Salvini said “lies and insults from some foreign NGO confirm that we are in the right: reducing departures and landings means reducing deaths, and reducing the profits of those who speculate on illegal immigration”.

“I stand firm: ports closed and hearts open,” he added.

Rose Gold: The Fashion Trend That Just Won’t Go Away