Judge grants US citizenship to twin son of same-sex couple

A twin boy born to American and Israeli same-sex parents was wrongly denied US citizenship when his twin brother was not, a US judge has ruled.

The judge in Los Angeles found that the state department was wrong to request biological evidence that the boy was blood-related to his American father.

The US had originally only granted citizenship to his brother after his test showed DNA from the American dad.

The case was one of two filed on behalf of gay American couples with twins.

Pro-LGBT immigration group Immigration Equality, which brought the case on behalf of parents Andrew and Elad Dvash-Banks, cheered the ruling.

“This is a huge victory for Ethan Dvash-Banks and his family,” said Aaron C Morris, executive director of Immigration Equality.

“Ethan will no longer be considered the undocumented twin of his brother Aiden,” said Mr Morris, who also acts as a lawyer for the couple. 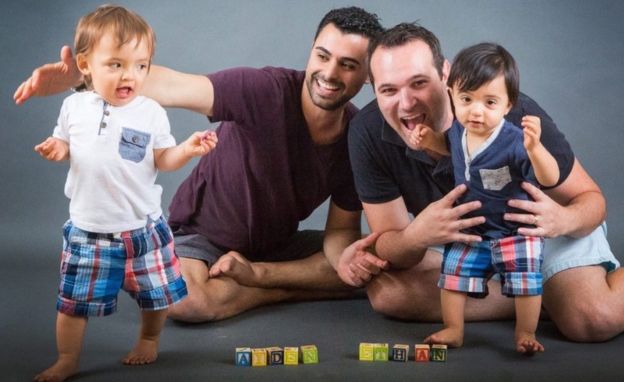 Why was only one child granted US citizenship?

The boys were born via surrogacy while the married parents were living in Toronto. Ethan was conceived using his Israeli father’s sperm and Aiden by his American father’s.

Because only one child shared a biological relationship with the American, a US consular officer rejected the parents’ application for citizenship, while also awarding a passport to their other two-year-old boy.

Mr Morris argued they had been discriminated against because they are gay, and that heterosexual couples would not have been subjected to such scrutiny.

But the state department pointed to guidance on its website that says “a child abroad must be biologically related to a US parent” in order to acquire US citizenship.

“For two years, this is something that weighed on us every single day,” said Andrew Dvash-Banks.

“Not knowing whether Ethan would be allowed to stay in the US is something we went to bed with every night. Now, our family is whole and safe.”

The couple had chosen not to reveal which child was born by each father’s biological material, but ultimately consented to a DNA test after a series of questions from consular officials that they found intrusive and offensive.

What was the ruling?

US District Judge John F Walter of the Central District of California ruled on Thursday that the Trump administration’s US Department of State had wrongly interpreted a statute related to birthright citizenship, and found that blood is not relevant.

He said the fact that the parents are married is sufficient enough to grant Ethan his American citizenship.

The courts “have come to the conclusion that there is no biological requirement to pass citizenship if you are a married couple,” Mr Morris told the BBC, adding that the parents are feeling “greatly relieved”.

“They were living with a child that was basically considered to be undocumented and now they have proof from a federal judge that he is a citizen just like his twin brother.”

“It’s more than ridiculous, its almost perverse,” he said.

“It was so absurd and unnecessary, and the government never explained why they were construing the statute in this way.”

The State Department has not said whether they will appeal the case, and has not commented on the ruling.

The case is similar to one brought by Immigration Equality on behalf of another couple in London, American Allison Blixt and her Italian wife Stefania Zaccari.

Mr Morris, who is also representing the women, said he hopes the judge’s ruling in California should be enough to persuade the Washington DC court to grant citizenship to their child.

Buhari votes in Daura as polls open in Nigerian election