National Democratic Congress (NDC) Member of Parliament for Kumbungu, Ras Mubarak, has stated that he is heading to the Supreme Court to seek an interpretation of the law that requires the Speaker of Parliament to be sworn in to act as President when the elected Head of State and deputy are unable to perform their functions.

According to him, the Constitution is not clear on the circumstances which require the Speaker to be sworn in as the elected President may still be able to perform his duties even though he is in the country.

“This exercise [of swearing in the Speaker] actually makes our democracy a lot more exciting but as exciting as it is, it is important to also test the Constitution. I am of the view, that if the President of the Republic and the Vice President are out of the jurisdiction, does that incapacitate them and make them unable to perform the functions of President and Vice? The President can send e-mails from wherever he is in the world directing his Chief of Staff and his Ministers to carry out certain instructions. If he’s not trusting of e-mails, he can send telegraphs from wherever he is around the world and he can make phone calls,” Ras Mubarak said.

“So this thing about whenever the President is out of the jurisdiction then it means he’s unable to perform his functions is clearly an anomaly. He does not necessarily have to be in the country physically [to perform his duties. When he travels outside the country he does so in his capacity as elected President of the Republic of Ghana. The President’s physical absence from the jurisdiction does not incapacitate him from performing his functions.” 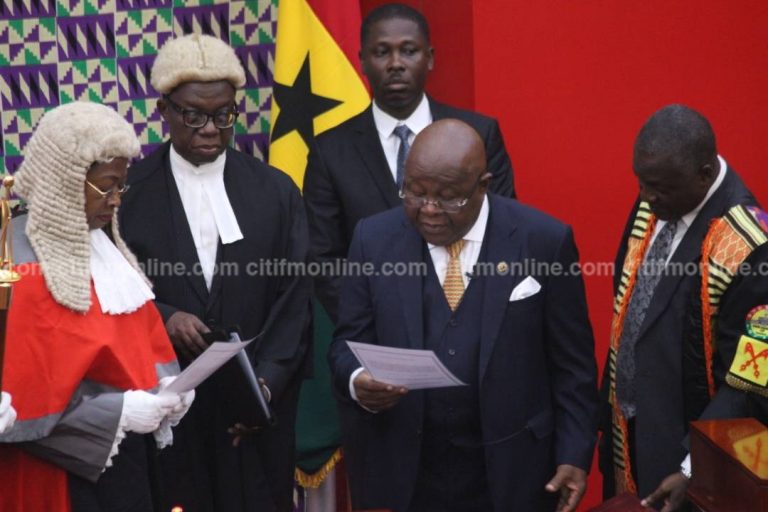 ‘Anomaly in the Constitution’

The law concerning the swearing-in was breached by a former Speaker of Parliament, Doe Adjaho in 2014, when he refused to take the oath of office as acting President at a point.

Both President Mahama and his Vice Kwesi Amissah-Arthur had traveled outside the country at the time.

This compelled the Managing Director of Citi FM, Samuel Atta-Mensah, and a United States-based Ghanaian lawyer, Prof. Kwaku Asare, to file a suit at the Supreme Court, to among other things, seek an interpretation of Article 60 (12) of the 1992 Constitution, which requires that the Speaker takes the oath of office each time he is to act as President.

The Supreme Court, in a unanimous decision, declared that the Speaker of Parliament, Edward Doe Adjaho, violated Article 60 (11)-(12) of the 1992 Constitution when he declined to be sworn in to act as President.

The issue has been brought under the spotlight yet again following the swearing in of Speaker Prof. Mike Oquaye as acting President for the second time in a week today due to the absence of President Nana Akufo-Addo and Vice President Dr Mahamudu Bawumia, who are in Ethiopia and the United Kingdom on medical leave respectively.

Mike Oquaye was first sworn in last Sunday after President Akufo-Addo travelled to Liberia for the inauguration of new Liberian President George Weah.

Speaking on Eyewitness News, Ras Mubarak stated that his lawyers were preparing to file a case before the country’s Apex court seeking an interpretation of the law, taking previous cases into consideration as well.

“The interpretation we have given the law is not what the framers of the Constitution envisaged. Today technology is aiding us to do things that we never envisaged 20 or 30 years ago. We’ve been to the Supreme Court twice on this; Asare and Atta-Mensah, but I think we’ll have to go back to the Supreme Court,” he said.

“I have actually been in touch with my lawyer, who happens to be my senior colleague in Parliament, Dr. Ayine. I’ve given him indications to file the necessary processes for us to have the Supreme Court take a third look at the position they took a year or two ago. It should also look at the inconveniences that it poses to all of us that each time the President and Vice are out of town we would have to come back to Parliament and swear in the Speaker. We have an anomaly in the Constitution and the best place to have that fixed is to go to the Supreme Court and have them take a third look at this.”

A number of critics of the law have argued that even when he is out of the jurisdiction, the President still represents the country as its leader.

Ras Mubarak, who shares this view, argued that President Akufo-Addo swore in Shirley Ayorkor Botchway as the Foreign Minister at the Ghanaian Embassy in Ethiopia.

“We’ve even seen examples of the President being outside the country and swearing in the Foreign Affairs Minister. In what capacity did he swear in Shirley Ayorkor Botchwey? Do you see the absurdity of the situation?” he queried.

Ras Mubarak stated that it was important to consider the financial implication of having to summon MPs back to the House every time the First Gentleman and his deputy are out of the jurisdiction, to swear in the Speaker to act in their stead.

“Each time the President and Vice are out of the jurisdiction, it means Parliament would have to be recalled. [Today’s] Swearing in was the second in the space of just one week. Members of Parliament came last Sunday to swear in the Speaker, gone back to their constituencies and have been recalled to swear in the Speaker as President again. Calculate the cost of having 275 Members of Parliament and recalling them to undertake this exercise,” he said.

Naana Opoku-Agyemang is a threat to Ghana’s development – NPP