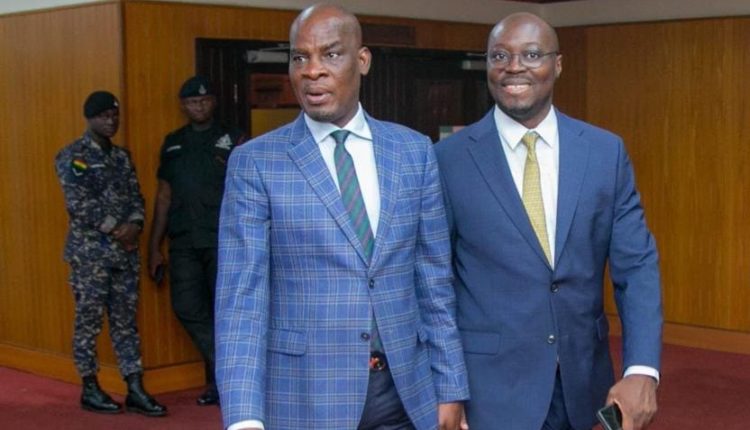 Before Parliament resumes this January, Leadership of the Minority Group in Parliament, made up of members on the ticket of the National Democratic Congress (NDC), would be reinforced with fresh-brains and focused-minds to reenergize the side and further strengthen its fortitude in holding the Majority Group to task, The New Publisher has gathered.

Reports suggest that Member of Parliament (MP) for the Ajumako-Enyan-Esiam Constituency who is a former Deputy Minister of Finance- Dr. Cassiel Ato Forson, Kwame Governs Agbodza – MP for the Adaklu Constituency and Dr. Zanetor Agyeman-Rawlings MP for the Klottey-Korle Constituency would be brought to the front bench to join the tactical Minority Leader, Haruna Iddrisu- MP for Tamale South.

The good old man with seemingly tired limbs and apparent fatigue, James Klutse Avedzi- the Deputy Minority Leader plus the firebrand Mohammed-Mubarak Muntaka – the Minority Chief Whip would be asked to make way for the new players to join Haruna Iddrisu at the front bench.

In the case of James Klutse Avedzi, he himself had indicated that he would no longer contest the Ketu North Constituency seat in the Volta Region after he had occupied the seat for five (5) terms.

“I have decided that five terms are enough for me, I do not intend to run again. 20 years is enough for me, I think someone else should take over in 2024. I have already informed some of my constituents. My decision is not because I have become unpopular, I believe there is no election I run that I will not win,” Avedzi noted in a recent interview with Citi TV.

It is however not clear the exact reason for which the firebrand Member for Asawase who has been an effective Minority Chief Whip, is returning to the back bench.

Speculations say it may be because of his heated clashes with the Speaker, Alban Bagbin, especially the frequent nature of such clashes.

Indeed there was an instance when one of those clashes got heated to an extent the Speaker told Mohammed-Mubarak Muntaka that going forward it would be difficult for him to catch the ‘eye of the Speaker’.

“Minority Chief Whip, you’ll have a difficulty in catching my eye again”, Speaker Bagbin at one point told Muntaka.

The reports hint further that Dr. Zanetor Agyeman-Rawlings is likely to take over from Comfort Doyoe Cudjoe as a Second Deputy Minority Whip.

Dr. Agyeman-Rawlings, is believed, would liven up the position and make it more useful than what Comfort Doyoe Cudjoe has done with it so far.

Even without the beefing up of the NDC Minority side, it was able to wrestle with the New Patriotic Party (NPP) Majority led by Osei Kyei-Mensah-Bonsu and snatch to its side the Speaker of Parliament position.

Many times, the Minority Group has been able to Whip all its Members to the Plenary ahead of critical voting when the Majority seemed unprepared and had to bend over backwards flying its Members into the country.

The reinforced NDC side would certainly be a crack team with the sole task of outsmarting and outwitting the NPP led Majority that is even already divided within and now has what has become known as a ‘Rebel MPs’ group.

With the reinforced Minority Group, the NPP Majority, more than ever, would require a tactful leadership that has no deficit in strategy.

It, as a matter of urgency, begs for a proactive and creative leadership with strategic negotiation acumen able to reach out to the other side of the divide and silently build consensus of mutual benefit behind closed doors before converging at the Plenary for the antics of parliamentary procedure.

Meanwhile, there are no indications whatsoever the NPP is considering a more tactical front that would not haplessly stand akimbo and watch with an unplanned glee while it is outwitted like it was during the vote for Speaker.

It does not need the ‘business as usual’ fire-brigade type of leadership that was incapable of managing the expectations of some of its Members to an extent they held a press conference to wash in public, several yards of unclean linen.

The Majority Leader, Osei Kyei-Mensah-Bonsu, after some 28 years in Parliament, has repeated on several platforms and media interviews that he is no longer interested in returning to Parliament after his current term.

Kyei-Mensah-Bonsu first became a Member of the Parliament in January 1997. He has kept his seat since then, representing his constituency in the 2nd, 3rd, 4th, 5th, 6th, 7th and now the 8th Parliament of the 4th Republic of Ghana.