Gael Monfils said he was “dying on the court” and Novak Djokovic felt conditions were “right on the limit” of safety as the temperature soared at the Australian Open.

Monfils took the first set but suffered in the second, complaining of dizziness and leaving the court with a doctor.

“For sure we took a risk,” the 31-year-old Frenchman said.

“We both have the same conditions but I think it’s maybe a little bit too hot.”

Monfils struggled in stifling conditions as the temperature approached 40C

The extreme heat policy at the Australian Open does not use a simple maximum heat, rather a combination of factors including temperature, humidity and wind speed.

It was last enforced in 2014 when play was suspended after Melbourne had three consecutive days with temperatures above 40C.

The temperature is forecast to exceed 40C on Friday, prompting Monfils to say: “Good luck for the guys.

“I’m telling you I was dying on the court for 40 minutes.

“Sometimes we put our bodies at risk so just be smart and, if you have to give up, it’s not a shame.”

Djokovic, 30, agreed the conditions were “brutal”, adding: “I think there is a limit, and that is a level of I guess tolerance between being fit and being, I think, in danger in terms of health. 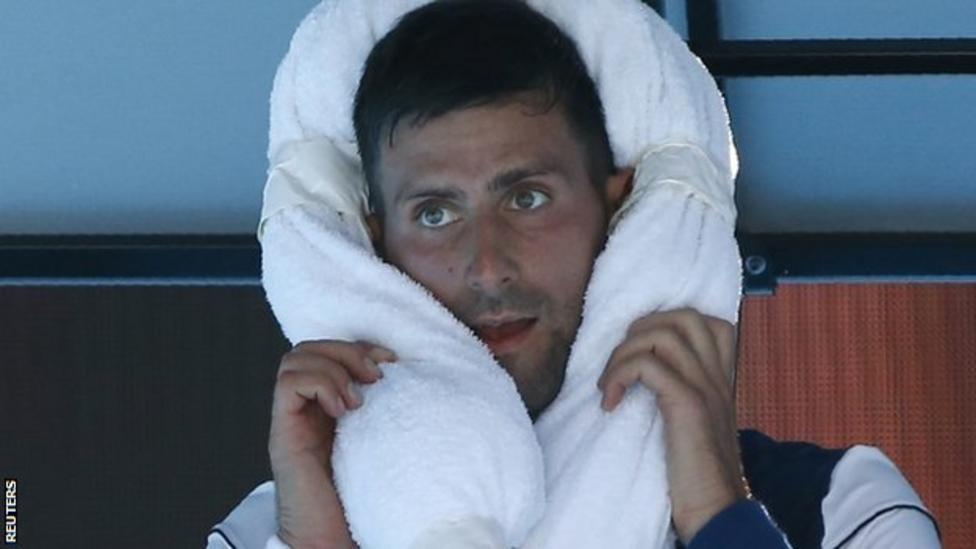 With the temperature peaking at 17:00 local time, the pair entered the arena in mid-afternoon and played through the worst of the heat.

Djokovic could not have asked for a more punishing examination of his fitness after six months out with an elbow injury.

Asked afterwards about his elbow, the Serb, said: “It’s still not 100%, but building.”

Seeded 14th after sliding down the rankings during his lay-off, he found himself up against an in-form Monfils hopeful of finally beating Djokovic at the 15th attempt.

The former world number one, who has a new service action to take pressure off his elbow, began poorly, making four double faults in the opening two games as he fell a double-break down at 3-0.

But he clawed his way back as the pair shared 36 errors between them across the first set.

Monfils managed to hold on after seeing his 3-0 lead disappear, edging through another tense service game and wasting his first set point with a woeful drop shot.

It was midway through the second set that the Frenchman started to struggle with conditions, and Djokovic took advantage.

He broke the ailing Frenchman’s serve three times in the third set and saw off five break points on his way to clinching victory in the fourth.

“It was just one of these days where you had to stay tough mentally,” Djokovic added.

“I think physically it was obvious that you just have to try to hang in there.”

Support Ghana with Your Expertise – Akufo-Addo to Exxon Mobil Chiefs

I’ll Join Ebony to Hell If Heaven Rejects Her – Musician