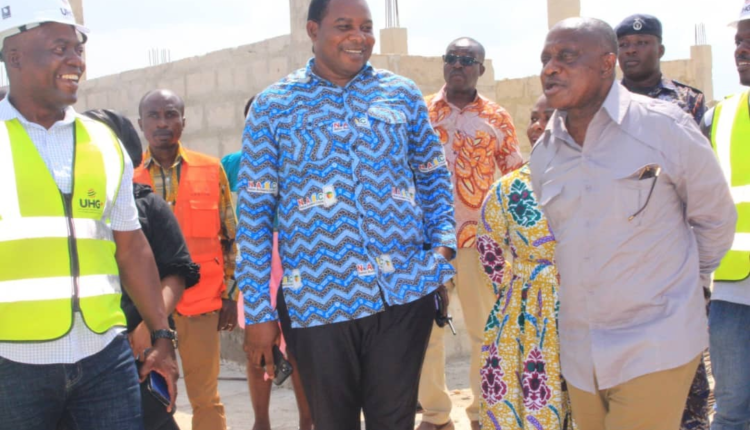 The Municipal Chief Executive for Obuasi, Honorable Elijah Adansi- Bonah has revealed that the decision by the Assembly to improve infrastructure in schools in the Municipality is so far yielding positive results.

The MCE was speaking with the Media at the end of a day’s tour of the Municipality by the Ashanti Regional Minister, Hon. Simon Osei Mensah who was in Obuasi as part of his visit to some four (4) districts in the Municipality.

Honorable Elijah Adansi- Bonah Obuasi said he was working in collaboration with the Member of Parliament for Obuasi West.

Hon. Kwaku Kwarteng to close the infrastructural gaps in schools in the Obuasi Municipality.

According to a statement released by Social Enterprise Development Foundation of West Africa (SEND) suggested some 5,403 schools in Ghana were in critical condition with another 2,417 schools still under trees with a total of GH3.5 billion needed to fix the se tor’s educational gap.

However the Obuasi MCE said he deems it as a personally project to replace old school blocks with new ones, every year, which he said has so far achieved results.

“Ever since I assumed office, I have decided to channel more resources into educational development hence have decided to build more school blocks including replacing old ones with new blocks”.

The Obuasi Municipal Assembly under Hon. Adansi- Bonah since assuming office in My, 2017 has embarked on plethora of educational projects including completing a 12- unit Kokoteasua school block, 3- unit Adaase school with ancillary facilities, renovation of Presby, Salvation and New Nsuta schools as well as new school blocks at Obuasi Methodist, Bogobiri school, Sanso school, Bidieso school among others.

The Regional minister as part of the tour visited the Obuasi Municipal Assembly to inspect the ongoing works on the administration block, the newly constructed Obuasi Central clinic funded by the Mineral Development Fund, the 12- unit Methodist classroom project funded by DACF- RFG and the Obuasi Trauma and Accident center.

Hon Adansi-Bonah again, reiterated his commitment to make judicious use of the Assembly’s resources by channeling them into transformational projects.

At the Trauma and Accident center, the Project manager Frank Godwin Acquah estimated work done to be 45%. He assured that the construction works is within scheduled and will be completed within the stipulated 30 month period.

After touring the four districts namely; Obuasi Municipal, Obuasi East, Akrofuom and Adansi Asokwa districts, the Ashanti Regional Minister Hon Simon Osei Mensah said he was happy with work done in the districts but was quick to add that work on some Agenda 111 projects and Assembly blocks for some new districts have delayed.

He promised to take the matter up to salvage the situation.