Police believe they have identified the suspected perpetrators of the Novichok attack on a Russian ex-spy and his daughter in Salisbury in March, according to reports.

Several Russians were involved in the attempted murder of Sergei and Yulia Skripal, the Press Association say.

They have been identified through CCTV, cross-checked with border entry data.

Earlier this month, Dawn Sturgess, 44, died after being poisoned by the same nerve agent, in nearby Amesbury.

Her partner Charlie Rowley, 45, was also poisoned on 30 June and remains seriously ill in hospital.

Police believe the incidents are linked. The UK government has blamed Russia, but the country’s authorities deny any involvement.

Mr Skripal, 66, and his daughter, 33, who were discovered slumped on a bench in Salisbury on 4 March, have been discharged from hospital and moved to secure locations.

“Investigators believe they have identified the suspected perpetrators of the Novichok attack through CCTV and have cross-checked this with records of people who entered the country around that time,” a source with knowledge of the investigation told the Press Association.

“They (the investigators) are sure they (the suspects) are Russian.”

The Met Police, who are leading the investigation, have declined to comment. The BBC has not been able to independently confirm the story.

Philip Ingram, a former British Army intelligence officer and chemical weapons expert, said the development supported his perception that this was a “professional attack” designed to send a “political message” – adding that it happened two weeks before the Russian election.

“My view is that the primary reason behind it was to send a message out to dissenters – and Sergei Skripal was chosen because he was based in Salisbury and that gave the Russians plausible deniability by saying, oh it must have leaked from Porton Down, because it’s just up the road,” he said. 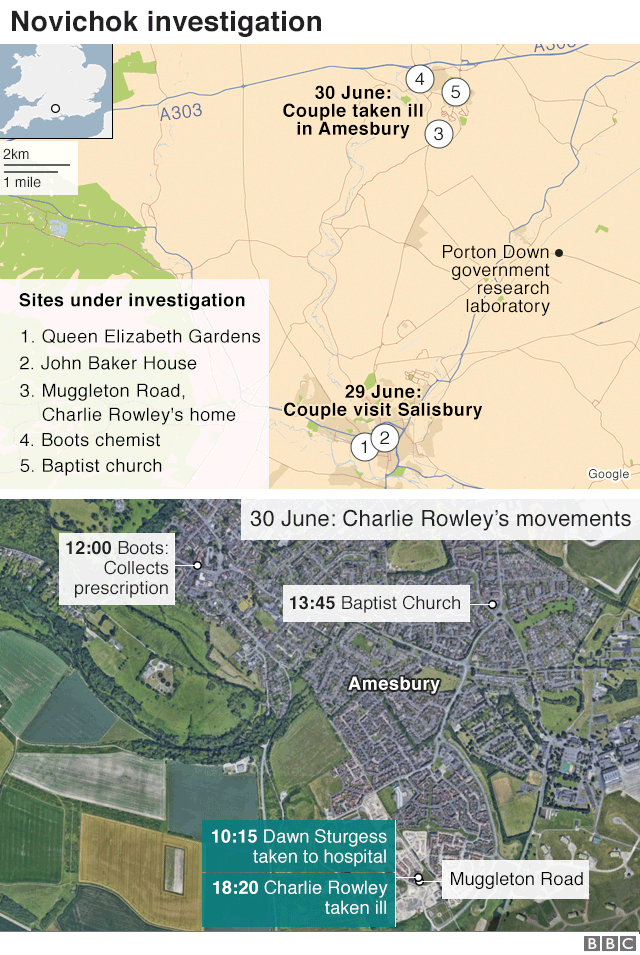 They are trying to establish where the container, thought to be a bottle of perfume, originated from, and how Mr Rowley and Ms Sturgess first encountered it.

On Wednesday, international chemical weapons experts completed their investigations in Amesbury, where they sought to identify whether the substance which poisoned the couple was from the same batch used against the Skripals.

The risk to the public remains low, according to Public Health England.

Mike Wade, deputy director for health protection in the South West, said: “The advice remains – if you didn’t drop it, then don’t pick it up.”