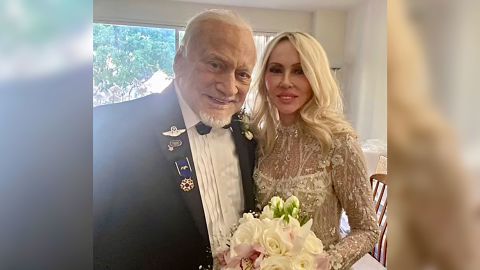 Edwin “Buzz” Aldrin, who became the second person to ever set foot on the moon in 1969, following crewmate Neil Armstrong, married his “longtime love” on his 93rd birthday on Friday.

“On my 93rd birthday & the day I will also be honored by Living Legends of Aviation I am pleased to announce that my longtime love Dr. Anca Faur & I have tied the knot,” Aldrin wrote. “We were joined in holy matrimony in a small private ceremony in Los Angeles & are as excited as eloping teenagers.”

He posted two photos of himself in a tuxedo and Faur in a long-sleeved glittering dress.

Aldin also thanked fans for their birthday wishes in another Friday tweet. “It means a lot and I hope to continue serving a greater cause for many more revolutions around the sun,” he wrote.

Armstrong was on the moon’s surface for two hours and 32 minutes and Aldrin, who followed him, spent about 15 minutes less than that.

The two astronauts set up an American flag, scooped up moon rocks, and set up scientific experiments before returning to the spacecraft. They also spoke to President Richard Nixon via radio from the Oval Office.

All three astronauts returned home to a hero’s welcome.