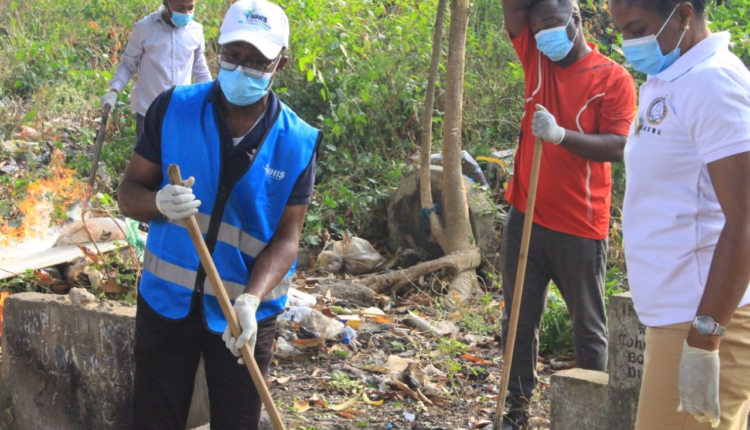 The Obuasi office of the National Health Insurance Authority has collaborated with the Obuasi Municipal Assembly to clean the principal streets of Obuasi as part of activities to commemorate NHIS’ active month celebrations which started in December 2022.

Interacting with the media at the sidelines of the exercise, the Manager of NHIS Obuasi office Kwabena Kyeremanteng said the clean-up exercise was part of the NHIS medium term strategic plan which was rolled out in 2022. As part of the plan, he narrated, the scheme is focusing on preventive healthcare as against curative healthcare.

“Our objective is to focus more on preventive healthcare which we believe is less expensive as compared to curative healthcare. This is key to our Medium term strategic plan”.

Mr. Kyeremanteng also revealed that the NHIS has so far registered 159,353 residents of Obuasi which represents 81.01% of population coverage and 99.6% of their annual target.

The Manager said the office will leave no stone unturned in 2023. He emphasised that the office will intensify its sensitization drive to register more people unto the scheme.

Fuseina Imoro, the Obuasi Municipal Environmental Health officer lauded NHIS for coming out in their numbers to clean the environment.

She added that it was important for individuals, groups and corporate institutions to support the Assembly to clean the environment.

She appealed to the general public to be environmentally conscious and not dispose of refuse indiscriminately especially along the streets.

She said the Assembly has formed a taskforce to see to it that those who dump refuse anyhow are dealt with according to the law.

“Currently, there are skip containers sited in vantage areas in the Municipality, there is door to door refuse collection ongoing so I don’t see why people should dump refuse anyhow. If you are found, the laws will deal with you”.

Madam Fuseina further revealed that the Environmental Unit of the Assembly in 2023 continue with a monthly clean up exercise and will step up public education on the need to maintain environmental hygiene.