The couple, believed to be Charlie Rowley, 45, and Dawn Sturgess, 44, fell ill at a house in Amesbury on Saturday and remain in a critical condition.

Police say no one else has presented with the same symptoms.

There was “nothing in their background” to suggest the pair were targeted, the Met Police said.

Home Secretary Sajid Javid will chair a meeting of the government’s emergency Cobra committee later to discuss the developments. 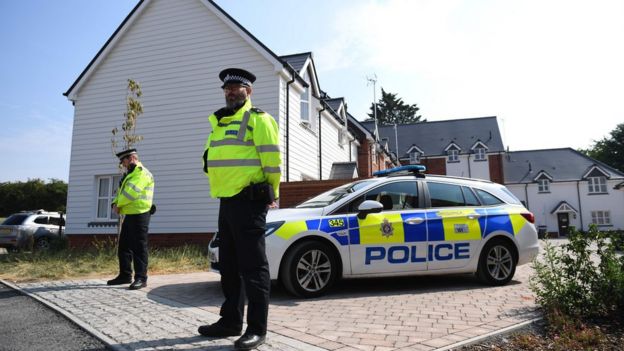 On Saturday, paramedics were called twice to a house in Muggleton Road in Amesbury – first at 11:00 BST after Ms Sturgess collapsed, then later the same day, after Mr Rowley also fell ill.

Wiltshire Police said it was initially thought the two patients had been using heroin or crack cocaine from a contaminated batch of drugs.

The news that Novichok was to blame was announced following analysis at the defence research facility at Porton Down, Wiltshire.

What do we know about the couple’s movements?

Partners Charlie Rowley and Dawn Sturgess spent Friday afternoon and evening visiting shops in Salisbury, the city where Sergei Skripal and his daughter Yulia were poisoned.

The following day Ms Sturgess, who is understood to be a mother of three, was taken away on a stretcher by an ambulance crew.

Friend Sam Hobson said she had appeared to have a fit and was “foaming at the mouth”.

“His eyes were wide open, glazed and pinpricked, and he was sweating, dribbling and making weird noises.”

Mr Hobson said the police and firefighters were in “hazard suits” and “cordoned it all off”.

Ms Sturgess’ father Stephen, 65, told The Times the family found out she may have been poisoned by a nerve agent from TV news.

“We heard from the hospital on Sunday and we gave them Dawn’s GP details but we didn’t hear anything from the police.

“We know as much as the next person in the street. We actually called the police station for information.”

Novichok, a resilient and resistant nerve agent developed by the Soviet Union in the 1970s and 1980s, takes effect within minutes, blocking messages from the nerves to the muscles, causing bodily functions to collapse.

It was used in March in an attack on Mr Skripal, a former Russian double agent, and his daughter Yulia.

They were found slumped on a bench in Salisbury – about 10 miles from Amesbury – after being exposed to Novichok.

The two were critically ill in hospital for weeks but both were discharged in less than three months.

The highest concentration of Novichok was found on the Skripals’ front door.

The UK government blamed Russia for the assassination attempt but Russia has denied any involvement and accused the UK of inventing a “fake story”.

How did it happen?

The BBC’s security correspondent Gordon Corera said the most likely hypothesis was that the Novichok was left over from the attack on the Skripals.

Metropolitan Police Assistant Commissioner Neil Basu said they could not confirm whether the nerve agent came from the same batch but the possibility was “clearly a line of inquiry”.

His officers are examining the couple’s movements to determine where they were poisoned.

So far no contaminated items have been found and the police say they have no idea what the nerve agent was contained in.

Chemical weapons expert Richard Guthrie said it was possible that the couple came across the Novichok which poisoned the Skripals after it had been disposed of “in a haphazard way”.